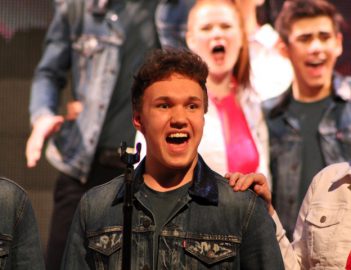 “Evening with the Ambassadors and Accents is my favorite performance because it’s a good chance for relatives and community members who couldn’t go to a competition to see our program,” said Nordeen, who is in his third year with the Ambassadors, the school’s mixed show choir. “Competing is fun, but it is nice to perform for an entire auditorium of supporters.”

The Evening with the Ambassadors and Accents is set for 7 pm, March 24 at CHS Auditorium.

Olivia Mulry, senior in her first year of all-female choir Accents, agreed the night is special.

“I have a lot of friends and family who don’t have the time or ability to travel like we do every weekend, so putting on the show in a local setting is really nice,” Mulry said. “It provides a way for our loved ones to see and understand what we’ve been working on since last August. It’s great to have such a solid support system in our community.”

The CHS competition show this year is “Superstition.”

‘I really love it this year, mostly because of how different it is from our show last year,’’ said senior Amelia Harrison, in her second year with Accents. “It is based more around a theme rather than a story, which gives great opportunities for drastic shifts in both our singing and dancing style. I’d say the two most drastically different points in our show are both of the bookends of it. Our first number is ‘Superstition’’ by Stevie Wonder, which has much more of a modern feel to it and has choreography that leans more towards the hip-hop/funk side of things.

“Our final number, though, is pretty much the polar opposite. We end our set with our version of ‘Luck Be a Lady’ from the musical ‘Guys and Dolls,’ which drastically shifts our style to more of an old-fashioned musical theater, big Broadway finale.’’

Mulry enjoys seeing what other schools do during the competition season.

“There are so many creative ideas for competition shows,” Mulry said. “I’ve even seen a tiki-themed set, complete with a giant lobster dancing onstage. It’s an amazing way to showcase the talent of so many kids from across the country. Seeing what they can do and interacting with them is always a lot of fun.”

Nordeen said his favorite part of this year’s program is the storyline.

“While the dialogue between songs helps direct the story, the lyrics of the songs really drive the story along, creating a unique narrative,” he said.