The only accurate way to describe Ester Pafford would be as one of God’s most powerful warriors. Ester stormed heaven about everything from the evil in the world to the misfortunes of her friends. And she invited everyone she knew to join her.

For a long time, a number of us assembled in Ester’s small apartment in Zionsville every Wednesday evening for food, fellowship and prayer. Ester cooked from a menu of dishes from her native Philippines. There was always plenty. Afterward, she led us in offering petitions to the Lord of the universe; pleas to right wrongs and humble words of thanksgiving. 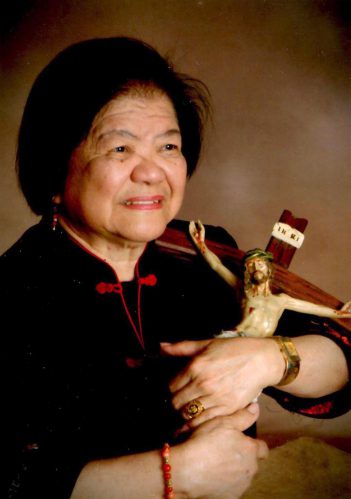 Ester collected sacramental objects, everything from paintings to statues and crucifixes. Most were gifts from friends, and her apartment was filled with them.

On the 13th of every month for more years than I can account for, Ester led a special service of songs, prayers and petitions for healing. Whether laying on hands is your way of faith or not, it was impossible to take part in one of these events and not believe that God heard every word she uttered, and there were many reported healings.

Ester was frequently invited to the Abbey of Gesthemani in Kentucky to pray with the monks. Often, she asked friends to go with her. She brought boundless joy with her to those halls where Thomas Merton wrote and prayed and is now buried, and to every other place she went. She had friends in California and often visited there, bringing her faith and spiritual joy with her.

Ester was serious about God’s gift of life, and she loved every minute of it. She was likewise endowed with a great sense of fun. She liked to sing along with songs on the radio, and she loved romantic movies. She also enjoyed line dancing with her husband, Bob Pafford. Even after Bob died several years ago, Ester lived life to the fullest, savoring every minute of it.

Ester died March 4 after a long illness. She leaves an empty space where all that faith and prayer and joy resided. I will miss her, and so will everyone else who ever knew her.