During a conference at the Indiana Statehouse Jan. 18, Hoosier Women Forward announced plans to initiate a leadership training program this summer for Democratic women. HWF is a nonprofit dedicated to educating and encouraging women to pursue political office.

“We want to harness the energy and talent that’s out there, all across Indiana, and create a powerful, diverse network of engaged Democratic women,” Liane Hulka, attorney and HWF board chair, stated in a press release. “Our mission is to increase the number and influence of Democratic women in elected and appointed governmental positions at the local, state and federal levels and in positions of influence in their communities and the private sector.”

HWF will select 20 to 25 Democratic women each year to participate in a nine-month training program that combines study, mentorship and field experience to illuminate the path to political office.

Dierdre Thornton, a Carmel resident running for the Democratic nomination for the 5th Congressional District, said she learned about the organization through Hulka and is optimistic about the results. Thornton will be guest speaker and a resource for program participants.

“I see (my role) now being an advocate and to share with other women that there’s an organization out there that will support them if that’s what they aspire to do,” Thornton said. 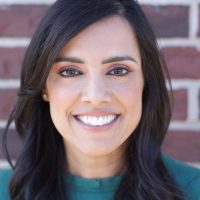 Fishers resident Poonam Gill will work with HWF in a similar way. Gill was motivated to run for the Indiana House of Representatives this year after recognizing the disparity between the number of men and women in elected office.

“When we have 50 percent of our voting public in Indiana as women but only 20 percent of our elected officials are women, we have to somehow close that gap,” she said. “How do we do that? We have to be willing to step up and get involved.”

Gill said HWF is looking for applicants to volunteer, advocate and stay active in their communities.

Applications will be available in May. The inaugural program will begin in September. For more, visit hoosierwomenforward.org.