You are at:Home»Current in Carmel»Carmel Community»Why does Carmel have fewer potholes than Indianapolis? 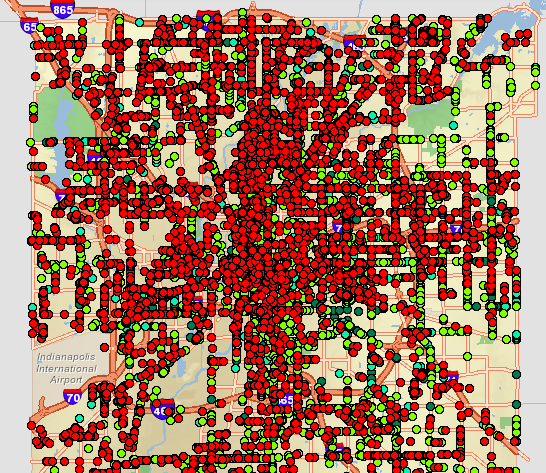 The city of Indianapolis recently filled more than 30,000 potholes on its roads, and there’s still plenty of work to be done. As of Feb. 19, the city’s website reported nearly 8,000 potholes still needed filled.

In Carmel, meanwhile, the number of reported potholes is 223, and the Carmel Street Dept. has already responded to patch each one.

Carmel Mayor Jim Brainard said it’s hard to find many potholes compared to Indianapolis because Carmel spends more than three times as much per resident on resurfacing.

In 2017, Indianapolis spent $16 million on resurfacing roads while Carmel spent $6 million. That’s $18.50 per capita spent in Indianapolis and $66.66 per capita in Carmel.

“We don’t let the base of the roads deteriorate,” Brainard said. “That’s what causes potholes is water coming up from the bottom.”

So why can Carmel spend more than three times as much per person on road resurfacing than Indianapolis? There are many reasons, but one is the median income of residents: Carmel’s is $113,194 and Indianapolis’s is $44,615.

Brainard said Carmel also has more snow removal vehicles on the road per resident. Brainard said Indianapolis has about 120 snow removal trucks out after a snowfall while Carmel has about 90. He said it’s is because Carmel adds plows to other city vehicles, such as water company trucks, and cross-trains employees on snow removal. Getting the roads cleared quickly helps prevent the melting/freezing process that causes ice to expand in cracks and create potholes.

Another obvious difference is that Indianapolis has more land mass and roads than Carmel. Indianapolis has 8,100 miles of street lanes to cover, and city officials estimate it would cost $732 million to upgrade the road conditions to “fair.” Carmel has 486 lane miles that need to be maintained.

Brainard said Marion County has too many roads serving one-story developments. He said Carmel’s increased density has made it possible to keep up with road conditions.

Some in Marion County have proposed a commuter tax to help solve Indianapolis’ budget problem when it comes to maintaining roads.

Under a potential commuter tax, the county that hosts a job would receive a portion of income tax either by raising taxes or distributing the existing taxes. Some estimates project it could mean $25 million in additional revenue for Indianapolis every year.

Brainard noted that Carmel also has a larger population during the day, about 14 percent more with a daytime population increase of 12,747 because of commuters.

“From a revenue standpoint, it’d be great because we have more people coming into Carmel during the day than going out,” he said. “A lot of people in Marion County don’t realize that.”

Despite how lucrative it would be, Brainard said he opposes the idea.

“It’s bad policy for the region,” he said. “It’s terrible policy. We ought to be paying more or less the same taxes for the same services.”

State Sen. Jim Merritt, whose district covers parts of both Marion and Hamilton counties, said part of the problem is that leadership in Indianapolis didn’t immediately address the pothole problem until negative media attention focused on it.

“They should have had the trucks ready and began to fix the holes immediately,” he said. “(Indianapolis Mayor Joe) Hogsett should know that Indiana winters can be harsh.”

Indiana Speaker of the House Brian Bosma he it’s not true that Indianapolis doesn’t have enough money for roads. He noted that Indianapolis received an extra $8 million in its budget from the gas tax but said legislators can’t force Indianapolis to spend it on the right fixes.

“We adopted the largest infrastructure funding mechanism in the country with no debt and nearly 50 percent of that is going to local units of government,” Bosma said. “They tell you they don’t have the funds. I would not believe them.”