Fourth-grade student Lily Henderson received recognition for her unique accomplishment – growing a 21-pound cabbage through a school project. She was recognized as the National Bonnie Plants Cabbage Program’s Indiana state winner. She received a $1,000 savings bond to apply toward her education. 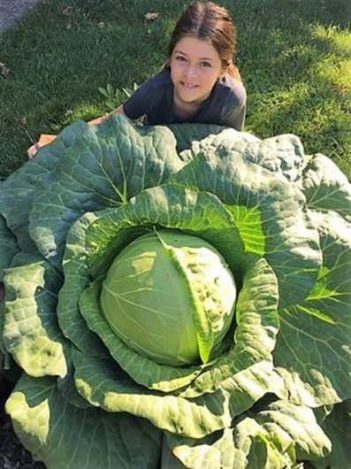 The 10-year-old joined the rest of the third-graders in her class at Shamrock Springs Elementary School in planting a cabbage and growing it over the summer. When the students returned as fourth-graders in the fall, they brought the cabbage information and photo to class.

“Lily and her dad built the planter box for the cabbage. Her grandparents are farmers in northern Indiana, and they brought down compost and we used it in the planter box,” Lily’s mother, Amy, said.  “Then we picked it and weighed it in June and sent it back with her to her grandparents.”

At her grandparents, Lily made lots of recipes with the cabbage, including slaw, fried cabbage and baked cabbage wrapped in bacon, which Lily said was her favorite.

The Bonnie Plants Cabbage Program involves 1 million students across the U.S., with 20,910 kids participating in Indiana. Lily was randomly selected by Indiana’s Agriculture Dept. as the winner.

Next year, Lily’s sister will be in third grade, and the Henderson family will go through the cabbage-growing process again.

“The whole neighborhood was into it and would come and check it out,” Amy said. “It was definitely a family project. So many people could relate to it because everyone got one in the third grade. It was pretty unbelievable.”