You are at:Home»Current in Fishers»Fishers Community»Fishers High School’s We the People team earns recognition at Statehouse, looks to nationals in Washington, D.C. 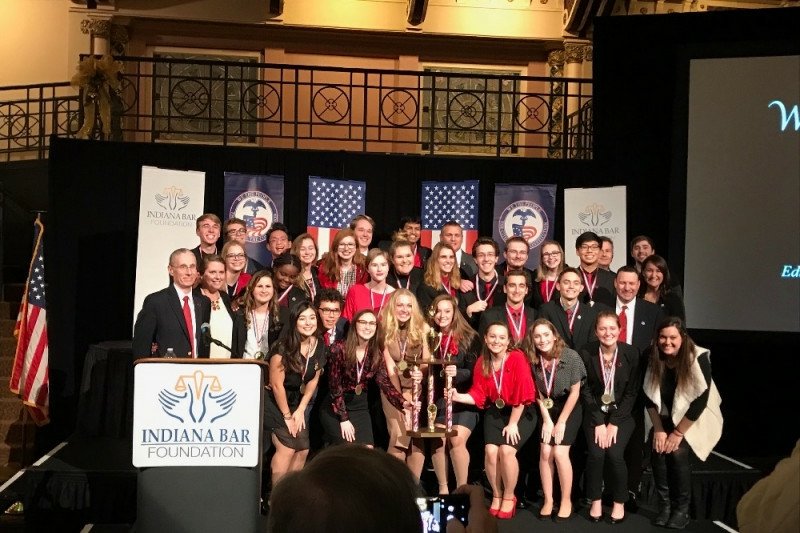 The Fishers High School We the People team was recognized at the Statehouse Feb. 22. (Submitted photo)

For the past 10 years, Liz Paternoster, a Fishers High School government teacher, has coached the school’s seniors on the We the People team. On Feb. 22, the team was recognized at the Indiana Statehouse.

Founded in 1987, the program focuses on teaching constitutional principles with the goal of retaining an educated population.

“They will represent one of the best teams in the nation,” Paternoster said. “Indiana has been a premier state with the We the People program. It has brought the nation a lot of firsts.”

Indiana’s We the People program was the first in the nation to have three-round finals and the first to include fifth-graders.

After Fishers won a state title in December 2017, the team  will receive a national award at a ceremony in Washington, D.C. The event begins April 27 and ends May 1.

By virtue of winning the state title, Fishers earned the honor of being Team Indiana.

When students were recently recognized at the Statehouse, they also received a private tour with Supt. of Public Instruction Jennifer McCormick.

Paternoster said students would be thrilled if they win Indiana’s first national title.
“I have already won as a teacher because they know how the government works,” Paternoster said. “We were talking a lot (recently) about Parkland and having the walkout day on March 14. These kids are smart. They know what is going on and they asked what is going change if we walk out those doors and stand in the parking lot.”

Paternoster said the students acknowledged nothing would happen, and her students came up with a more constructive response.

“We are contemplating getting students together in (writing a) petition to our representatives and congressmen,” she said.

A fundraising campaign is under way to raise $50,000 for the team’s trip to Washington, D.C.

Paternoster said the team has already reached half of its goal.

The Indiana Bar Foundation, which typically donates to the state’s designated We the People team, donated $15,800. Other donors have contributed $10,000.

A fundraiser at Top Golf, 9200 E. 116th St., is planned for March 11. Tickets start at $100.
Besides competing in Washington, D.C., the team will get to experience laying a wreath at Arlington National Cemetery and visit the U.S Capitol, White House and the Supreme Court.

For more on We the People, visit civiced.org. For TopGolf fundraising tickets, visit freshtix.com/events/fhswtpteeparty.