You are at:Home»Current in Zionsville»Zionsville Community»Franzman ends Zionsville swimming career with another title 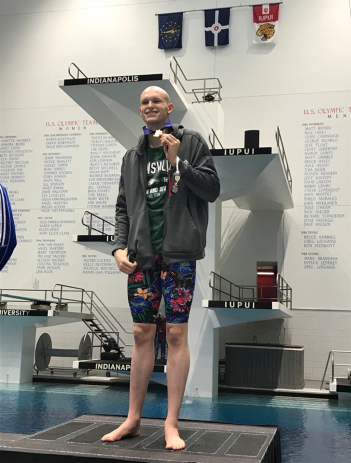 “My time with Zionsville has been so much fun,” Franzman said. “I wouldn’t trade it for anything. I can look back at my high school career without any regrets.”

Franzman captured his sixth state title by winning the 100-yard freestyle in 43.70 seconds at the IHSAA Boys Swimming and Diving State Finals Feb. 24 at the IU Natatorium at IUPUI.

“It was fantastic getting to go out on top in an event I have trained incredibly hard in,” he said. “The key to my 100 free win was really wanting to get at least one title my last year.”

Franzman, who will swim for Indiana University next season, set a personal-best time of 19.74 seconds in the 50 freestyle in finishing second to Carmel’s Drew Kibler, who won in 19.50. Kibler set a state record in Friday’s prelims in 19.38.

“This was very much a case of Drew and I pushing each other to do our best,” Franzman said.

After finishing second in the team standings the last three years, Zionsville placed third this year. Carmel won the team title for the fourth consecutive year.