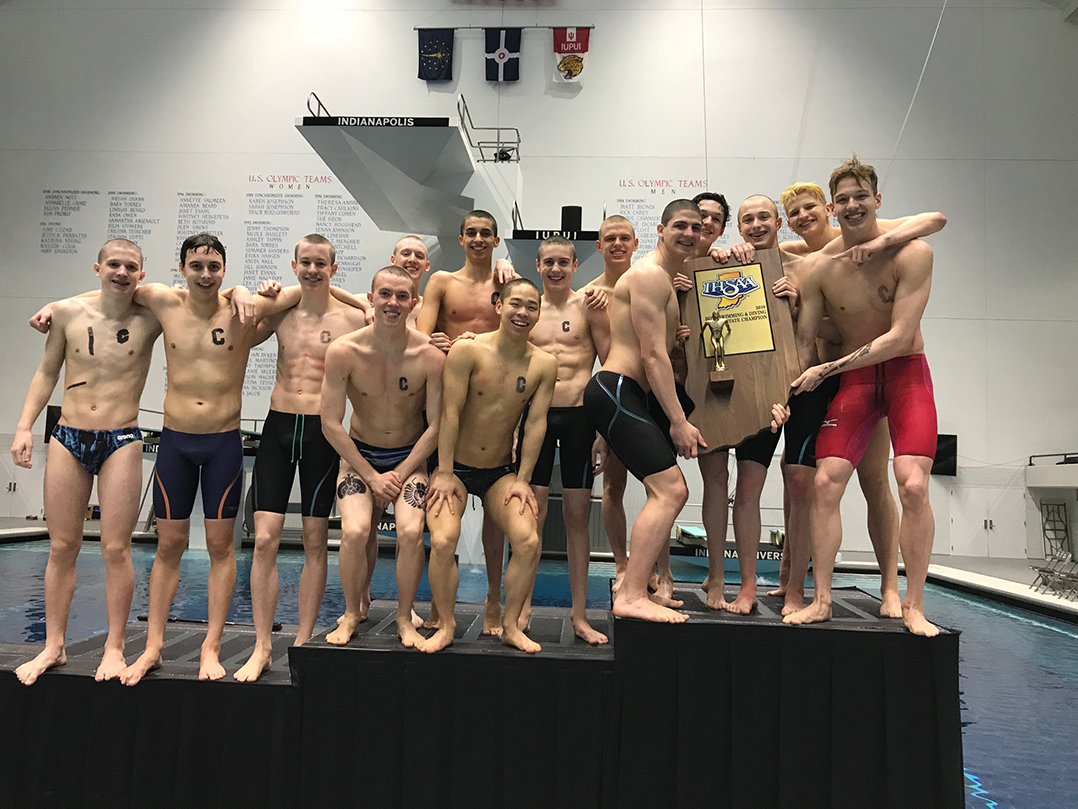 The top-ranked Greyhounds captured their fourth consecutive IHSAA Swimming and Diving State Finals title Feb. 24 at the IU Natatorium at IUPUI with a record 417 points, 215 more than second-place Franklin Community.

“The key was getting the boys to buy into each other and that the group could be greater than the sum of their parts,” CHS coach Chris Plumb said. “The boys pushed each other every day and made each other better.”

The point total surpassed his own expectations, Plumb said.

“I thought we could beat the record, and we had a shot at 400,” he said. “I think the surprises were in winning all the close races. You except to win some, but not 9 of 11 (swimming events).”

The 12th event is diving.

Senior Drew Kibler won the 50-yard freestyle in 19.50 seconds and the 100 butterfly in 47.16 seconds. Kibler joined seniors Stefano Batista, Andrew Couchon and sophomore Wyatt Davis on the winning the 200 medley relay. Kibler and Davis joined senior Brett Sherman and sophomore  Jacob Mitchell on the winning  400 freestyle relay. Kibler set a state and national record in the Feb. 23 preliminaries in the 50 freestyle with a time of 19.38 seconds.

Plumb said it has been special to watch Kibler compete.

“He works hard on his craft and it shows up in the meet,” he said.

Davis also was a double individual winner in the 200 individual medley and the 100 backstroke.

“The 200 IM was something we weren’t really thinking of six weeks ago, so that was a special swim, “ Plumb said of Davis. “He is a tough competitor.”

Other winners for Carmel were Mitchell in the 500 freestyle, Batista in the 100 breaststroke and the 200 freestyle relay (Batista, Couchon, Mitchell and Alec DeLong).

The 200 medley relay also set a state record of 1:28 in the preliminaries.