Larry Adams is ready for this history to repeat.

“About 10 years ago, I first shared the stage with Daniel Shock and Earl Campbell in Yasmina Reza’s ‘Art,’ a comedy examining the strain placed on the friendship of three French men by the purchase of a purely white painting,” Adams said. “This was one of my favorite show experiences in a nearly 30-year community theater career, and so when director Lori Raffel offered me the chance to do a show with these two gentlemen again, I jumped at it.” 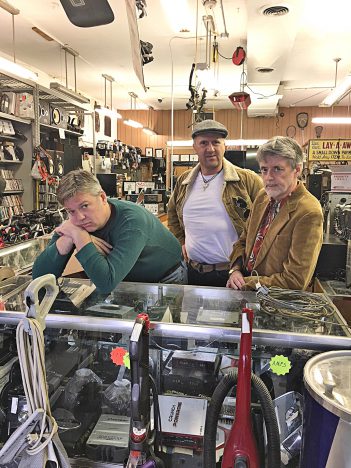 Shook and Campbell are Noblesville residents. Adams lives in Brownsburg.

“After seeing that production of ‘Art,’ I set out to find the perfect role for these same three guys,” Raffel said. “The result is ‘American Buffalo.’”

Shook is in his third show for CCP.

“The hardest part about this show, for me, is the short burst of dialogue,” Shook said. “You have to fill in some gaps in information on our own to make sense of it all, but once you do, you see the genius of it.”

Adams said his only exposure to Mamet was the 1992 film adaptation of “Glengarry, Glen Ross.”

“I actually find ‘American Buffalo’ to be a much funnier, entertaining and uplifting work, though still in Mamet’s typical dark and profane style,” Adams said. “As in ‘Art,’ ‘American Buffalo’ examines the relationship of three men, but this time as they struggle to reconcile their friendship with the distinctly American drive to get ahead. ‘American Buffalo’ is undoubtedly the most challenging script I have ever tried to master, primarily because Mamet’s style is authentically conversational.

Adams said anyone who has read a transcript of a normal conversation has experienced pages full of half-sentences and people talking over each other about subjects that seem completely unrelated.

“On the page, this can seem completely incomprehensible, but when heard aloud it strangely enough makes perfect sense,” Adams said. “This sums up Mamet’s style well.”