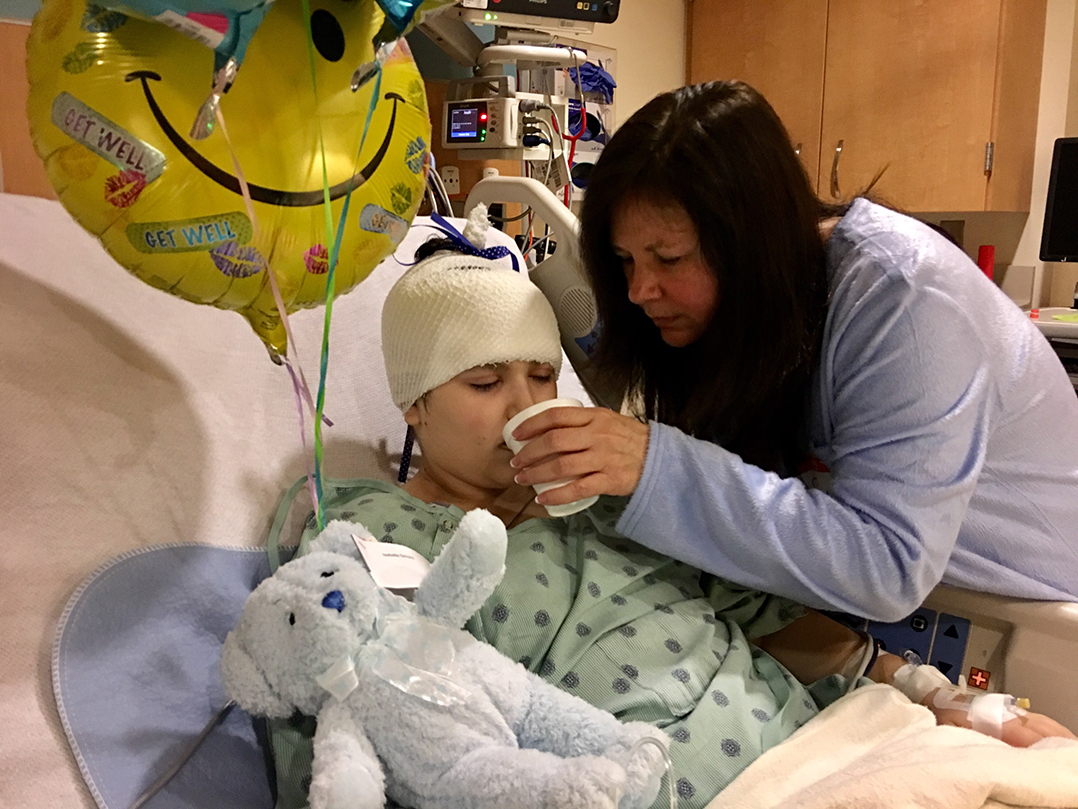 Tasha Simons, right, gives her daughter, Bella, a drink as Bella recovers from brain surgery and a stroke. (Submitted photo)

It won’t be how she originally planned it, but Carmel High School senior Bella Simons isn’t planning to let two strokes and a major brain surgery stop her from participating in the annual Dance Marathon.

Set for 4 to 10 p.m. Feb. 24 at CHS, the event is a fundraiser for Riley Hospital for Children, which Simons credits with saving her life.

Simons had her first brain surgery at Riley in October 2015 to remove a tumor, during which doctors discovered another tumor. She spent six weeks receiving radiation treatments and had been enjoying normal high school life until suffering a stroke during a college visit in November 2017. Doctors believe the radiation treatments damaged arteries and led to the stroke.

During surgery Jan. 11 to prevent future strokes, Simons suffered another stroke. She woke up unable to eat, speak or walk but has been making a steady recovery since then.

“It’s hard for her to write. Fine motor skills in her right hand are challenging,” said her mother, Tasha Simons. “Her baseline level of functioning was very high before the second stroke, and they are trying to help her get back to where she was.”

Bella hopes to return to school in late February. She’s missed out on the CHS events leading up to Dance Marathon, but she’s managed to remain one of the top fundraisers, collecting more than $3,700. Although she can’t dance, she plans to stop by the event to share her story and thank organizers for giving back to Riley – and her family.

“The students participating in Carmel Dance Marathon have supported our family through providing meals and visiting Bella,” Tasha Simons said. “They made cards, a poster and gave her CDM swag.”

Dance Marathons are scheduled at more than 60 Indiana high schools and colleges, and they are among the fastest-growing fundraisers for the hospital.

Learn more about Carmel’s event and find links to donate to top fundraisers at http://donate.rileykids.org/site/TR?fr_id=3576&pg=entry”pg=entry.