You are at:Home»Current in Carmel»Carmel Community»Judge Steven Nation will not seek fifth term

Judge Steven Nation announced he will not seek a fifth term on this year’s May ballot, the first time in 40 years his name will not appear. 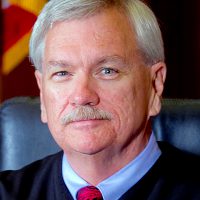 The 68-year-old said he plans to invest time in community involvement.

“It’s a six-year term, and I have 3,000 pending cases, and I’m involved in a lot of other efforts in the community,” Nation said. “I felt like to go ahead and maintain the level of involvement I want in my cases and the extracurricular activities, there was no way I could do it for the full six years, and if I couldn’t give 100 percent to the people, I felt like I shouldn’t be running for another term.”

“I think what I have enjoyed about whether I was prosecutor or deputy prosecutor or the judge was I always felt like I was involved in situations where people needed a resolution,” he said. “I enjoyed trying to resolve problems for people, though sometimes in criminal settings they didn’t like the way I resolved them, but I enjoyed the ability to help people, and I think that’s what I am going to miss the most.”