You are at:Home»Current in Zionsville»Zionsville Business Local»Kroger specialist says cheese!

Have you tried a myzithra lately? What about a Bellavitano soaked in Merlot or roasted in espresso? 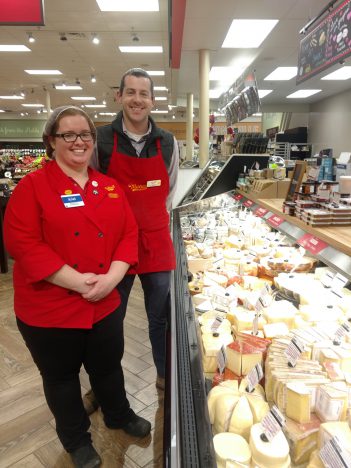 These cheeses are among more than 200 varieties available at the Boone Village Kroger. Cheese has been an important part of the grocery chain since a 2005 partnership began with Murray’s Cheese Shop, the oldest in New York City. More than 400 Kroger stores across the nation have a specialized Murray’s Cheese area with olives and jams.

Each cheese is identified with details like country of origin, cheese family, pairing ideas and pasteurization information. Expert cheese masters such as Ariel Bredlau can help determine the best cheese for specific needs and the right pairing.

“Cheese is fun, and it’s becoming more and more popular. People are wanting to learn more about it,” she said.

Narrowing down her favorite cheese is challenging for Bredlau because they taste differently depending upon the time of year it was made and whether the cows were eating grass or grain.

Bredlau earned the distinction of cheese master after training at Murray’s in New York City’s Greenwich Village to learn how to pair cheese, how it is processed and how to teach its other basics.

She then became Red Jacket-certified following a two-day training to gain in-depth knowledge of special cheeses.

“If you like learning and you like trying new things, it’s a really fun job,” she said. “I get to teach, but I get to learn, too. It’s a good job for a foodie.”

The next step for Bredlau is to become a Certified Cheese Professional, or CCP, a process that includes an intense written exam. Currently, only five people in Indiana with the certification.