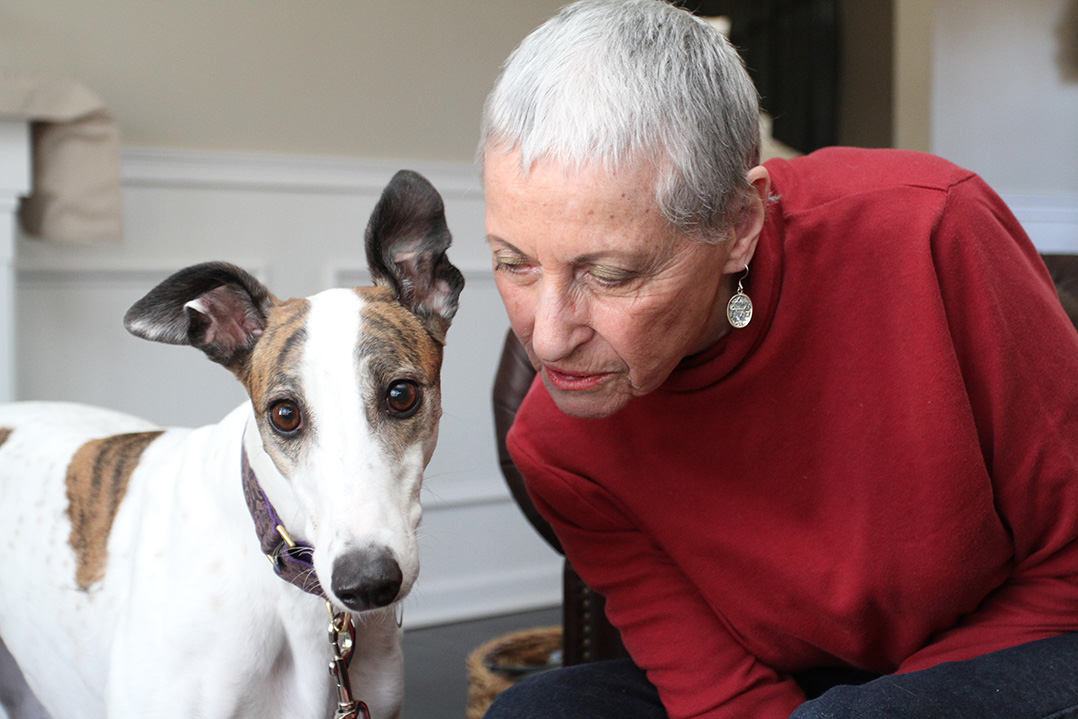 Susan Pratt and her greyhound Raisin.
(Photo by Sadie Hunter)

Lawrence resident Susan Pratt has had an affinity for Greyhound dogs nearly 20 years.

Pratt originally began adopting greyhounds through USA Defenders of Greyhounds in 1999, but her most recent adoption came from an Indianapolis-based organization, Prison Greyhounds.

Prison Greyhounds is an organization founded in 2009 that re-homes greyhounds after they complete their racing careers in Daytona, Fla. The organization transports the greyhounds to a drop site in Indiana. Pre-approved people can adopt greyhounds at the site, and the other greyhounds then go to Putnamville Correctional Facility, where prisoners help domesticate the dogs to prepare them for their new home.

Raisin, a 6-year-old retired racer, is the first greyhound Pratt adopted straight from the track.

“I had just lost a greyhound and I was getting older and thought maybe I shouldn’t get another dog,” Pratt said. “My daughter and I had gone to the Irvington market, and I met a woman there from Prison Greyhounds. We got to talking and she asked if I was interested in getting another dog, and (they had) one that’s in Daytona where her trainer there is very attached and doesn’t want her to go to anybody with no experience. I thought if the man cares that much about his dog, then I’ll take her.”

Pratty adopted Raisin, formerly named Raebanrae, in November. She has three dogs, one of which is a greyhound terrier mix. Tthe other two, including Raisin, are greyhounds.

“I was really impressed with the work they do,” Pratt said. “It’s a win-win situation for the dogs and certainly for the prisoners. I can’t imagine anybody not being impressed and impacted by the sweetness of greyhounds.”

The only other eligible attendees are greyhounds themselves.

“Other greyhounds come up to welcome them (the new dogs) and reassure them,” Louden said. “Greyhounds have been raised around just greyhounds, and they draw reassurance from being around the same breed.”

Since its founding, Prison Greyhounds has adopted out nearly 300 greyhounds. Twenty-seven greyhounds have graduated from the prison program.

Various meet-and-greets are held on throughout the state to educate the public on the breed. Prison Greyhounds requires adopters to read a book, “Retired Racing Greyhounds for Dummies,” prior to adoption. A home visit also is required.

Pratt said the trouble is worth it.

“(Raisin) is the most affectionate greyhound I have ever had,” she said. “She just warms your heart, she really does. Greyhounds have a way of folding up and getting quiet. They’re easy to care for.” 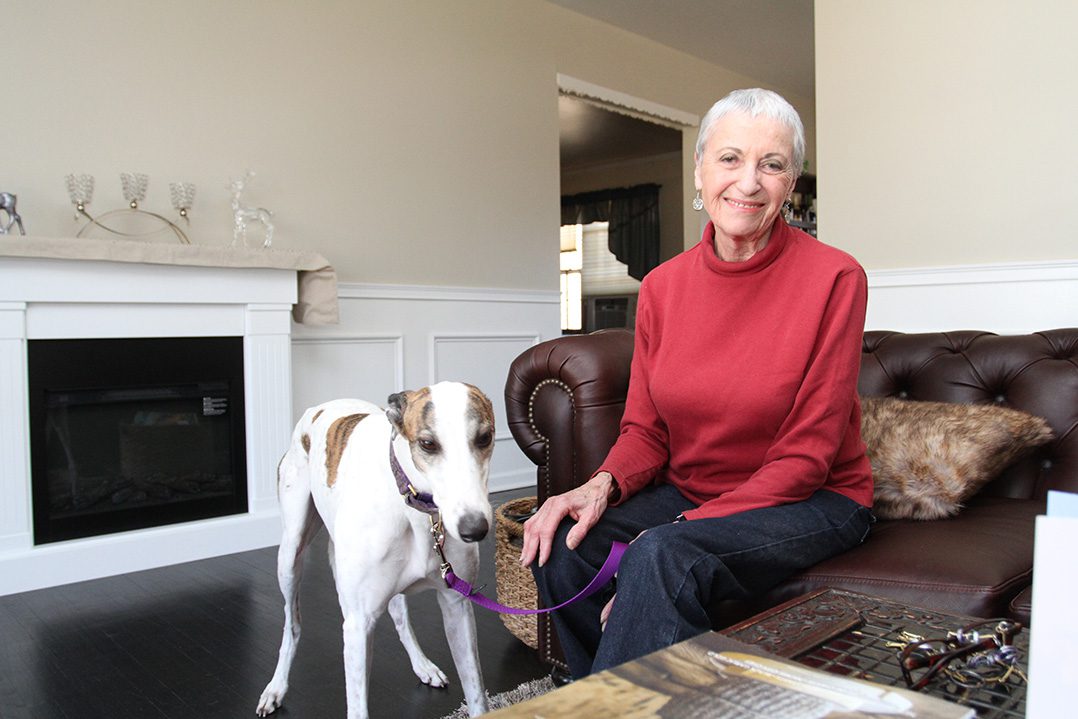 Susan Pratt pauses in her living room with Raisin, the greyhound she adopted through Prison Greyhounds in April 2016. (Photo by Sadie Hunter)

Previous name: Raebanrae
Racing career: Raisin raced 126 times, placing first in 18 races and second in 24. Her last race was at Daytona on April 16, 2016.
Age: 6 years old. Most retired racers are between 18 months and 5 years old.
Color: White brindle
Weight: 62 pounds
Re-homed: Nov. 4, 2017, during the “Home for the Holidays Haul,” an effort by Prison Greyhounds to get greyhounds adopted for the holidays.