You are at:Home»Current in Noblesville»Noblesville Cover Stories»State of the County: Commissioner Steve Dillinger provides annual update for Hamilton County 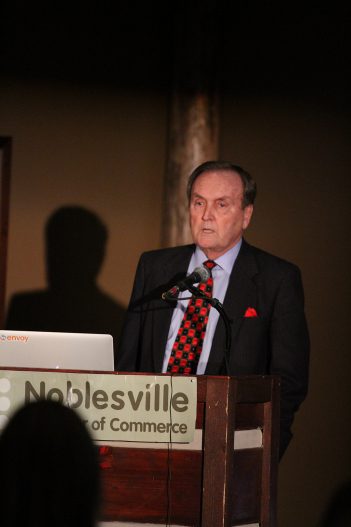 The 29th annual State of the County address, hosted by the Noblesville Chamber of Commerce, was given Jan. 24 by Hamilton County Commissioner Steve Dillinger.

Icy weather did not deter guests. The event at Purgatory Golf Club in Noblesville was sold out with 250 people. It also had a lengthy wait list.

In his address, Dillinger discussed county finances, infrastructure, capital projects, tourism, economic development and more for what’s on the horizon for 2018 while also highlighting the successes of 2017.

“I would put that up (against) any county maybe in the United States,” Dillinger said. “We are very solvent.” 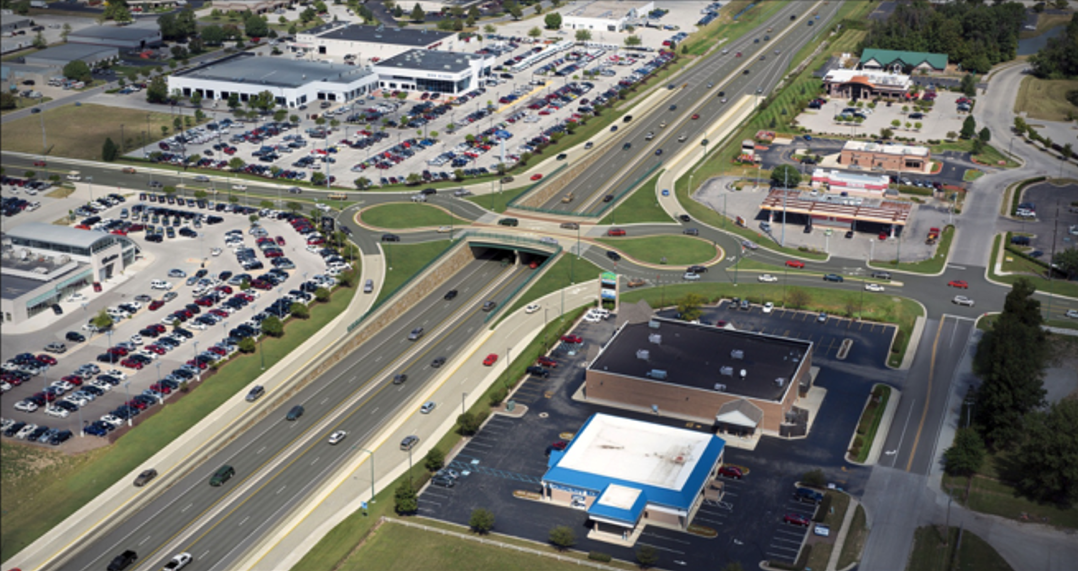 The first intersection constructed of the Ind. 37 overhaul will be at 126th Street and will begin in April. (Submitted renderings)

“In my opinion, Hamilton County’s continued success, to some degree, depends on our connectivity to our city capitol of Indianapolis,” he said. “It’s been pretty well taken care of on the west side (U.S. 31). Carmel, a little before that, made Keystone a thoroughfare, much like what we’re going to do on (Ind. 37).”

The overhaul of Ind. 37 would completely rid the highway of stoplight intersections through Fishers, the first phase, and Noblesville, the second phase, running the highway underneath elevated, dog bone-style roundabouts at each cross street – 126th, 131st, 135th, 141st and 145th in Fishers and Greenfield Avenue, Town and Country Boulevard, Pleasant Street and Ind. 32/38 in Noblesville. The first intersection to be started is at 126th Street. It will begin in April 2019 with an estimated completion date of November 2019.

The state has contributed $100 million dollars to complete the first phase of the project, while Hamilton County, Fishers and Noblesville have each agreed to contribute $16.5 million. But the second phase remains unfunded and without a timeline.

“The projected budget was about $124 million, but that’s a moving target,” Dillinger said. “Our hope is that we can get (phase one) done and then have some extra money to do phase two.”

The City of Noblesville also will be extending Herriman Boulevard south from 146th Street to 141st Street. 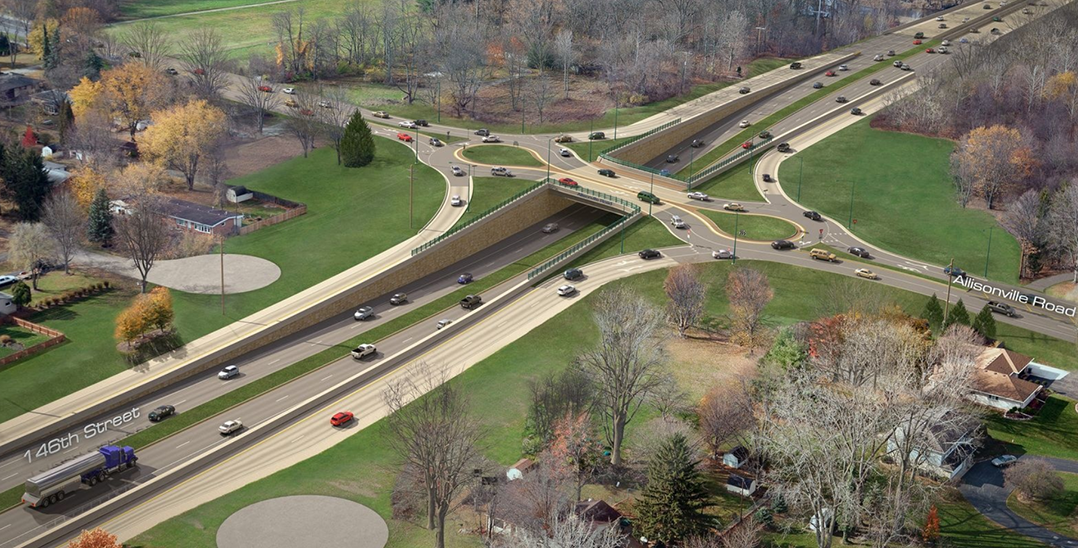 “The Ind. 37 project also creates an issue for us as a county at 146th and Allisonville. It’s problematic right now.” Dillinger said. “We’ve already assigned an engineering firm to take a look at this and start designing some things.”

Dillinger said money has not yet been secured to complete reworking the intersection, but that he and fellow commissioners Christine Altman and Mark Heirbrandt have a meeting in Washington, D.C., in March to meet with Vice President Mike Pence and a congressional committee to see if some funding can be secured.

A rendering looking north from Conner Street shows the 132,000-square-foot judicial center expansion to the west of the existing building. 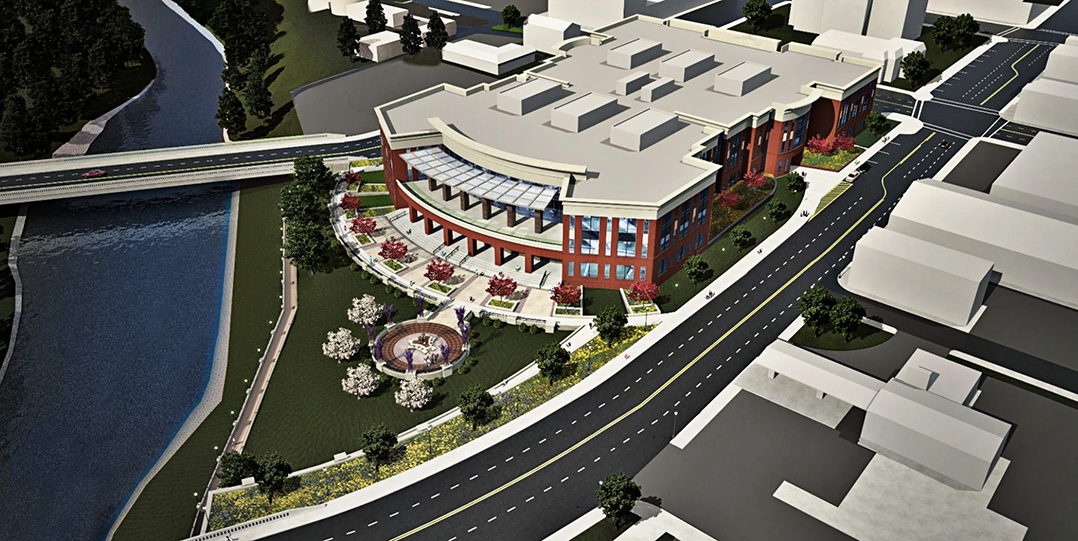 A rendering of the west elevation of the Hamilton County Government and Judicial center shows what the building will look like after the 132,000-square-foot expansion is complete.

The project will begin in May, with an estimated completion date of October 2019. The expansion will make it possible to move the offices of auditor, assessor, recorder and treasurer to the first floor of the building, which now are housed in the historic courthouse across Eighth Street. Dillinger said the second and third floors of the expansion will remain unfinished until there is a need for more courtrooms.

The $13.5 million expansion of the Hamilton County Jail will begin this month.

House Bill 1006, which took effect in January 2016, requires felons set to serve 1 year or less to remain in county jails, rather than federal prisons. The change in the law has since created an overcrowding issue for Hamilton County.

“We have a maximum jail capacity of 294 people, but we are running sometimes as many as 400, which made it very dangerous for our prisoners and our deputies,” Dillinger said.

In 2017, the county relocated its female inmate population to the juvenile center, which became underutilized several years ago when laws were changed to allow more juveniles to serve their time on home detention.

The $13.5 million expansion is slated to begin this month for a February 2019 completion and makes space for up to 136 beds.

“When you think of tourism, you think about Florida, Mexico, Hawaii, but it’s unbelievable what we do with tourism right here in Hamilton County,” Dillinger said.

Toward the end of his address, Dillinger mentioned speculation of Amazon opening a second North American headquarters in the Indianapolis area after the company recently narrowed its list of locations to 20.

Representatives from Amazon have said they require HQ2 to be located on 100 acres, be a 45-minute drive to a major airport, be within 2 miles of a major highway and have access to mass transit.

Based on those factors, Dillinger identified two possible locations in Hamilton County – Metro Airport in Fishers and a 37-square-mile area of land near Exit 210 and I-69 in Noblesville.

Metro Airport has 211 acres of commercial ground available; has close access to I-69, I-465 and Ind. 37; is centrally located; is a large population center with ample housing nearby; and is a quick drive to Indianapolis International Airport while also having space for the company’s small and corporate aircraft.

The Indianapolis Airport Authority owns Fishers’ Metro Airport, and because it is in Hamilton County, the commissioners have an appointment to the IAA board, which Dillinger holds. The IAA also has an estimated $5.4 billion annual economic impact for central Indiana.

Dillinger said the 37 square miles of land in Noblesville admittedly has less definite features, mainly because no one, at least publicly, is quite sure what’s going on in the area after a “mystery buyer” began offering farmers and landowners large sums of money for acreage in summer 2017. Previous landowners have been bound by nondisclosure agreements to not give further details. Rumors have ranged from Disney, to an airport, to a quarry or landfill.

For that area, Amazon’s land requirement is met, along with requirements for close proximity to an airport and major highways.