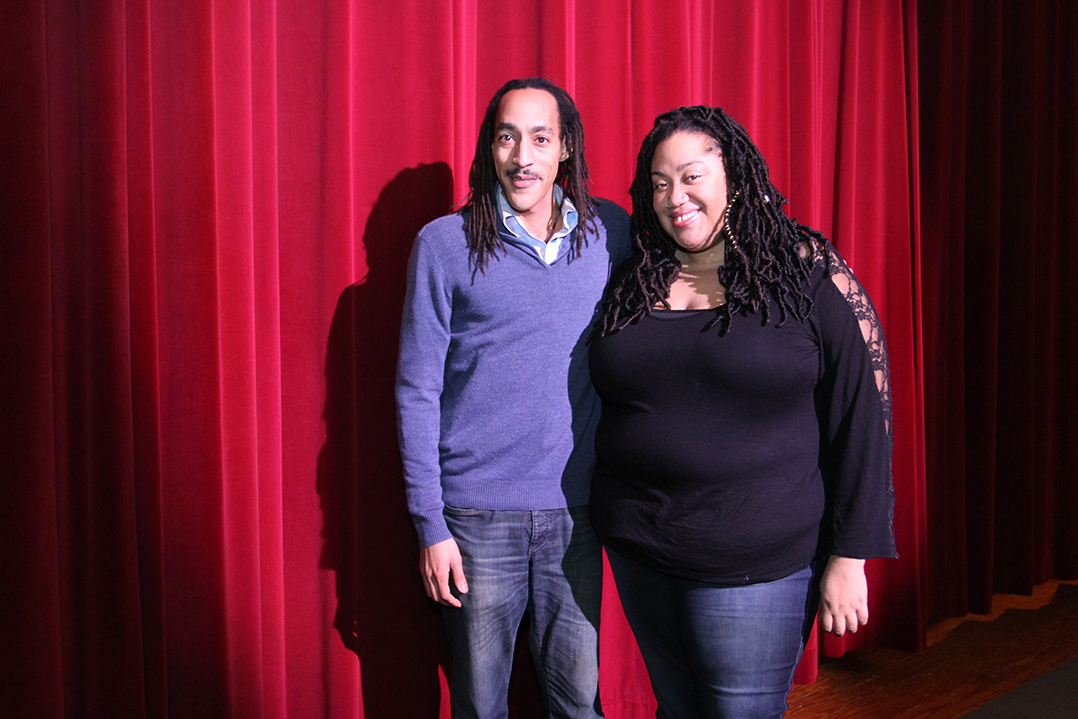 Village Voices Artistic Director and pianist Joshua Allen Thompson, left, and playwright Megan Simonton pause on stage at Theater at the Fort in preparation for their Feb. 24 performance. (Photos by Sadie Hunter)

Joshua Allen Thompson’s vision to celebrate unsung and underperformed masterworks of African-American dance, art and music has come to life.

Thompson and playwright Megan Simonton collaborated to create “Village Voices Notes from the Griot,” which will be presented at 7 p.m. Feb. 24 at Theater at the Fort in Lawrence.

“It’s a story and celebration through various genres of music that span from the mid-1700s all the way up to the 21st century today,” Thompson said. “There is a way to express that celebration and give homage through West African dance, spoken word and poetry, and also some vocal numbers.”

A griot is a member of a group of traveling poets, musicians and storytellers from West Africa.

Thompson said he plans to make it his mission to continue to give exposure to these pieces.

“It’s great we do this for Black History month, but this should be standard repertoire in a program that runs year-round,” he said. “That’s the overall mission, so we don’t get to pat ourselves on the back with mission accomplished. I played piano for 31 years, and in my entire time playing, there was only one piece I was ever given that was written by an African-American. So, I spent the last 30 years learning the works of Europeans. I’m going to spend the next 30 years learning works of folks who look like me.”

There will be two visual artists, Rae Parker and Deonna Craig, who will be painting the entire two-hour production live.

“With this being the last production (at Theater at the Fort), they will literally have an entire art gallery of their creations spread throughout the theater and the stage for the audience to interact with and see a visual representation of what we put together,” Thompson said.

The first production was held Martin Luther King Day at Newfields at the Indianapolis Museum of Art. The other performances are at the Eiteljorg Museum at 1 p.m., Feb. 10; Central Library at 6 p.m., Feb. 19; and the Jewish Community Center at 7 p.m., Feb. 22.

“Sometimes we are creating when we don’t even know it,” said Thompson, who lives on the northeast side of Indianapolis. “I’ve been researching and getting music, books and materials for my own pleasure.”

Thompson and Simonton performed in a show together at Madame Walker Theatre in Indianapolis in August 2017.

“Watching the performers there and being part (of that) got the fire going for me,” Thompson said. “I know what I’m supposed to do, and I got my idea. And half the people that are performing with me are the ones I want to do it. It snowballed from there. A week-and-a half later, I went to Megan with my concept. I told her, ‘There is a story to be written, and I’m not the one to write it, you are.’ She was gracious to lend her expertise and her vision to what she made of my concept.” 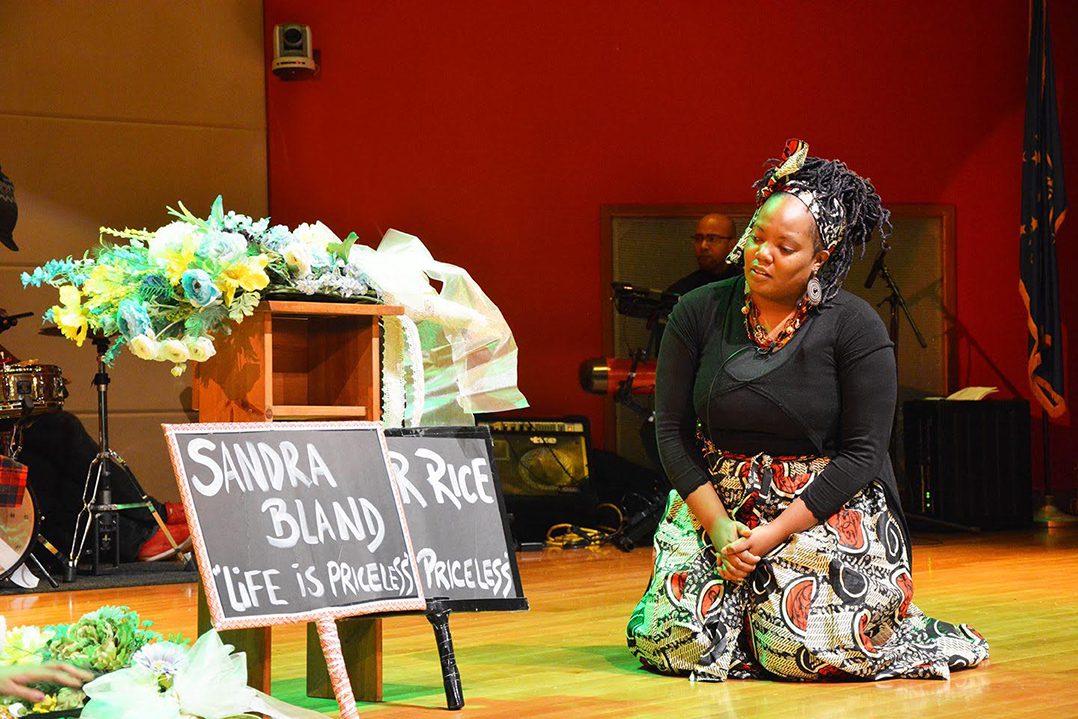 Thompson said Simonton was able to create a well-paced production.

“Megan has done an amazing job of increasing the drama when it comes to the musical numbers, and then kind of let you catch your breath a little bit,” Thompson said. “Then, as soon as you do, she cranks it back up again. It’s a fun piece to watch and a little thought-provoking as well.”

“I had all these puzzle pieces, and I basically took all of these items and wrote to make it a cohesive story,” Simonton said. “It takes you on a journey.”

Simonton and Bashiri Asad will perform together in an original song by Asad.

“Although I’m a vocalist in my own right, this time I didn’t actually wear that hat,” Simonton said. “Mostly, my hat is writer. I did write an original poem that will be performed by one of our griots, ‘Manon Voice.’”

There are two Duke Ellington pieces, but they are lesser-known works. One piece is “Single Petal of a Rose” from “The Queen’s Suites.”

“A lot of it for me is the underperformed because these works have been here for years,” Thompson said.

Thompson said the other performers brought underperformed numbers to the production as well.

“We’ve been friends for a number of years and watched each other grow as artists,” Thompson said. “We build each other up and take joy in each other’s success.”

Other performers include the Premium Blent quartet and Uzuri Asad.

“I lucked out into getting a cast of titans,” Thompson said. “I need them more than they need me. Individually, it’s amazing, but man, the power of combined effort is overwhelming.”

Simonton said the genres include classical, jazz and soul.

“We kind of touch on house music as well,” she said.

Thompson said all the genres build on each other.

“The ladies have been asked to paint according to their unsung inspirations,” he said.

Some of the works performed will be from William Grant Still, Margaret Bonds, Samuel Coleridge Taylor, Youssef Koumbassa and Jean Michel Basquiat, among others.

Thompson said he looks forward to the evolution of this production.

“We could do this every single year until we all pass away and never even scratch the surface,” Thompson said. 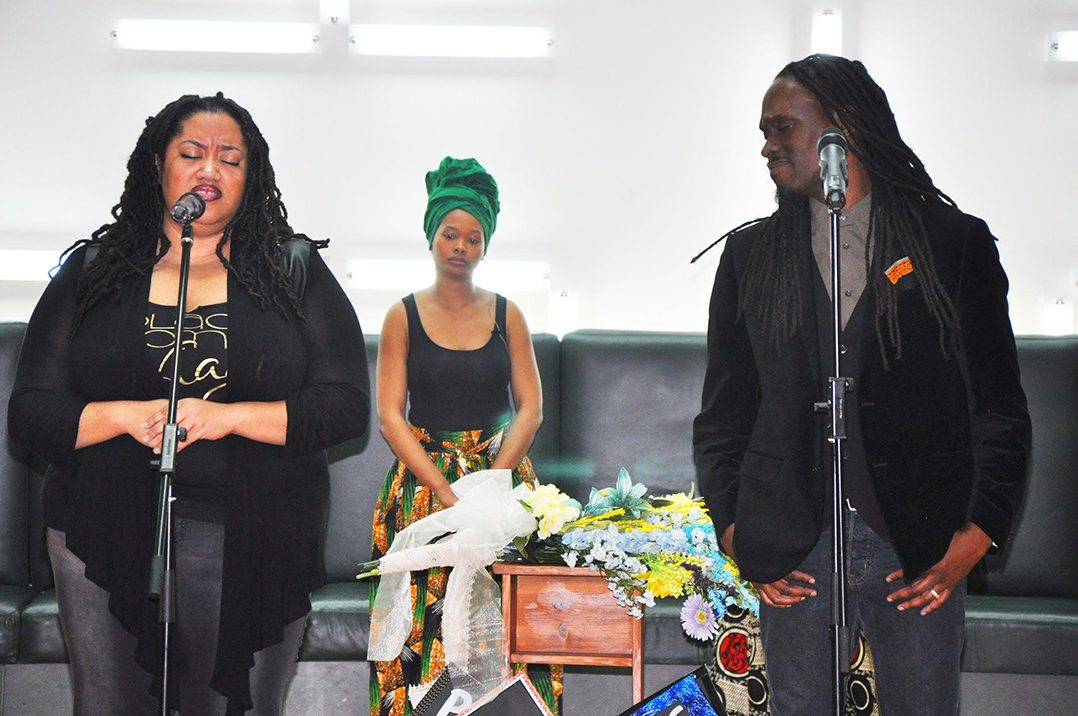 What: “Village Voices Notes from The Griot”

Tickets: $20 general admission, $15 for students/seniors and $12 for military/veterans. For more, visit artsforlawrence.org.