You are at:Home»Current in Carmel»Carmel Cover Stories»Breaking it down: Carmel’s Christkindlmarkt receives congrats, critiques in first year 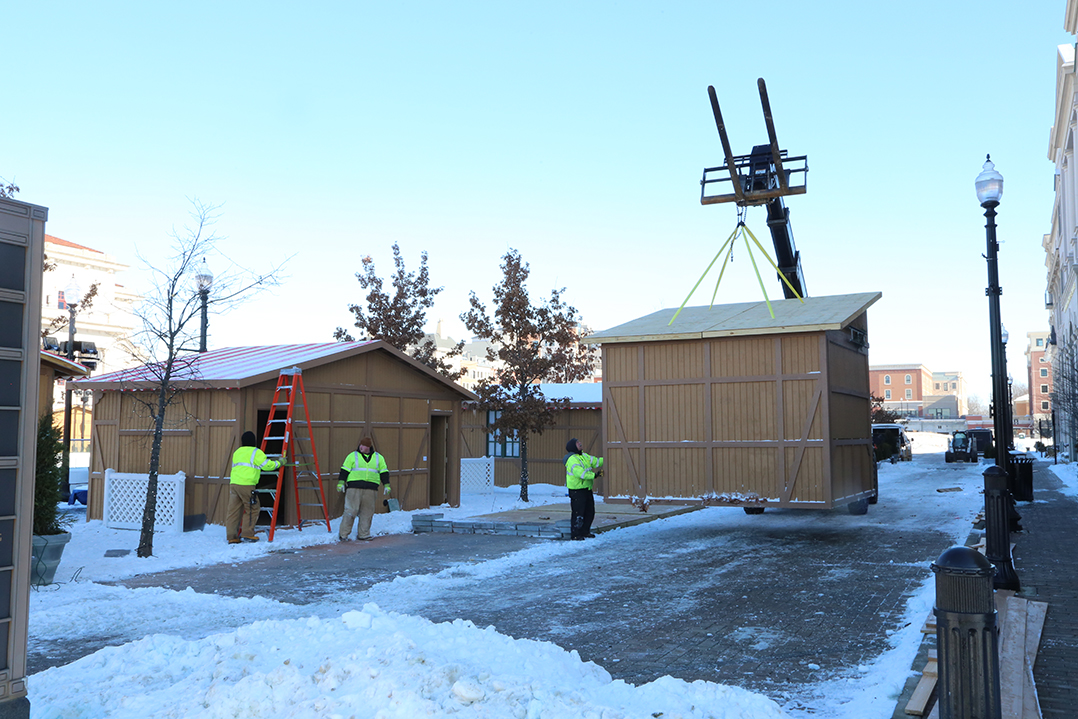 Electricity was in the air the night before the Carmel Christkindlmarkt opened in November.

And that’s not just a cliche for the excitement surrounding the inaugural day of the traditional German marketplace. Literally, there were thunderstorms and heavy rain.

Organizers huddled around laptops looking at the radar to determine if it would to be safe to operate the ice skating rink or open the booths.

On top of that, delays in construction meant that some booth vendors only had a day or so to train.

“It was pretty hectic, but I’m just so proud of everyone for all the work they did,” Christkindlmarkt Marketmaster and CEO Maria Murphy said. “It was pretty amazing.”

“It’s a minor miracle that it all came together,” said her husband, Brian Murphy, who  came on board through a paid position.

In its first year, the Carmel Christkindlmarkt, a nonprofit created by the City of Carmel, had a short timeline to put the event together. Some members of the Carmel City Council said they would have preferred to wait a year to open. Adding difficulty was the fact that huge crowds showed up at first — 48,000 in the first five days — and some vendors were caught off guard. Lines were long, and some vendors ran out of food.

“Everybody kept saying beforehand, ‘What kind of crowds do you estimate?’ And we said, ‘We have no idea,’” said Dan McFeely, president of the Christkindlmarkt’s board.

Some changes were made immediately and other changes are planned for  2018. A financial report will be presented to the Carmel City Council at some point.

First-year challenges notwithstanding,  Carmel Mayor Jim Brainard said  the market was extremely successful, citing the huge crowds and the positive impact on local restaurants. In total, 150,000 people attended the market.

CROWDS — One of the major complaints Maria Murphy heard were long lines for food vendors, and how the layout led to narrow, congested walking paths. One cause was  organizers were told the food vendors needed to be in specific spots for access to hot water.  But that wasn’t necessary because the sinks they ordered were portable. It was too late to rearrange the huts for 2017, but Maria said next year there will be a new layout with improved spacing.

Some changes were already made in 2017. Maria said the market was hesitant to add stanchions to corral lines because they would detract from the authentic German feel, but she said they became necessary and were added. Also, a second gluwein hut was added to the market to alleviate long lines for that popular vendor.

Maria said she’s exploring the idea of having roving vendors that can sell food such as hot nuts.

PARKING — Some attendees complained there wasn’t enough parking, creating difficulty for patrons of the neighboring Carmel Center for the Performing Arts. McFeely said signs directed visitors to the new Veterans Way Parking Garage, and organizers hope next year more attendees will park there.

GOODS — Maria said some attendees wanted less expensive German items available for sale, specifically in the $5 to $30 range. She said organizers kicked off the market with choices in that price range but quickly sold out because of the large crowds. She said it would have been too costly to ship additional orders from Germany, so some booths had only big-ticket items toward the end of the market. Next year, they will order more, she said.

In addition, the market ran out of gluwein mugs. More than 10,000 were sold in just nine days. It wasn’t possible to get more of the commemorative boot-shaped mugs made in time, but coffee mugs were printed, and thousands of those were sold. Originally, plans included allowing attendees to refill mugs for a cheaper price or return used mugs for a partial refund. But customers collected as many mugs as they could. For 2018, it might be possible for people to buy mugs without purchasing a beverage.

SAFETY — Some attendees worried the colorful fire pits were dangerous if someone tripped and fell in. Brian Murphy said there were supposed to be covers for the pits but they didn’t arrive. He said that will change next year.

FINANCES — McFeely said the market brought in $1.19 million in revenue during its six-week run. The total doesn’t completely go to the nonprofit. It’s possible up to half could go to vendors who sold items at the market, which is a boost for the local economy. It’s not yet known how much the market will have in its bank account for 2018. The overall costs and expenses are still being audited, McFeely said, so it’s not known if the market made a profit or broke even. The City of Carmel provided grants of at least $400,000 in 2017 to the nonprofit for its startup year, and some city employees helped the market. For example, some street department employees set up huts.

In the future, McFeely said the goal is to be revenue-neutral, meaning the market could survive on its revenues and not rely heavily on city grants, although it might be premature to expect that to be the case for the next market. The City of Carmel has already budgeted $125,000 in 2018 for the market.\

THOUGHTS FROM THE PUBLIC

“As a college student home from school, I found the Christkindlmarkt a great place to meet up with old friends and spend some time together.” — Abigail Miller

“I know there were a few kinks, but that is normal with anything that is new. It had the big-city feel but the small-town warmth.” — Ashley Shane

“Our cute collector boot mugs will be on proud display in our homes every December to remind us of the unique and amusing experience.” — Brian Bousman

“We went at night to enjoy the atmosphere and eat dinner, and for the most part it didn’t disappoint. We’d love to see more food and beverage options as well as more workers helping to take and fill orders during rush hour times.” — Nicole Hebert

SUGGESTIONS FROM THE PUBLIC

Current in Carmel reporter Adam Aasen received more than 100 comments from the general public about experiences at the Carmel Christkindlmarkt and The Ice at Center Green. Here are some common suggestions, many of which are already planned for next year: