“What else is a retired sportswriter going to do to finish out?” Brunner said. 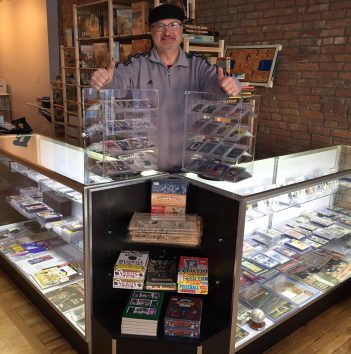 The News merged staffs with The Indianapolis Star in 1995. Brunner remained with The Star until 2000 when he joined Pacers.com. In 2011, he joined 1070, writing stories and making radio appearances.

Brunner’s personal memorabilia collection remains in a shoebox at home. He grew up a Washington Redskins and Washington Senators fan. He and his two older brothers had amassed a huge collection growing up.

“We had thousands upon thousands of cards, and my parents threw them out when we moved,” said Brunner, who lives in Lawrence. “So, you have that pain that lingers. I’ve always had an affinity for it, almost always older stuff. I don’t know if I’m trying to recreate the memories or get back what I had. I’ve always had a passion for that and games.”

Jayson Manship, who once worked with the Pacers, owned several businesses in the building where Brunner’s store is located. He offered Brunner a spot a couple of months ago in his game store shop.

“It was a lucky break for me because I have a home base instead of traveling around to go to shows all the time,” Brunner said.

Andy Albert, who owns a sports card store in Indianapolis, is one of two people who motivated Brunner.

“He’s been encouraging,” Brunner said. “He made me feel about the hobby again.”

The other motivator was Brody Stephens, an 8-year-old boy from New Palestine who died in April 2017 of viral complications from his battle with leukemia.

“All through his struggles, he came to the card shows,” Brunner said. “I was impressed this young guy had so much respect for vintage cards. He wanted a Pete Maravich rookie card. He wanted Lew Alcindor (Kareem Abdul-Jabbar) and Hank Aaron. You don’t see that with young kids. He would show up, and I would have something special for him at a show. When he passed way, I found out that his dream was to open a card shop after he played in the NBA, of course.”

So, Brunner and other sports card show dealers created Brody’s Card Shop for his funeral service. They brought their showcases and got his collection.

“Brody was 8, and he sort of had his whole life planned out,” Brunner said. “I was almost 60 then and didn’t know what I was going to do for the next five to 10 years of my life. I thought, I’m going to do this. At the time, it was more about doing shows, and then this opportunity came up.”