For Ryan Diem, it all started with an invitation for a charity golf event in the Chicago area in 2005 to support Allie Neff, who had stage IV neuroblastoma. 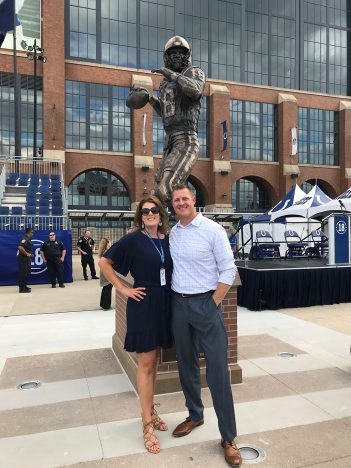 Allie, a 3-year-old from Rochester, Minn., lost her two-year battle with cancer in May 2006. The Allie & Friends Foundation was formed to raise funds for pediatric cancer research.

Diem, a former Indianapolis Colts offensive lineman who lives in Zionsville, is a foundation board member. His wife, Julie, is part of the leadership team.

“Over the years we realized people enjoy having a good time while raising money for a much-needed cause,” said Diem, who played for the Colts from 2001 to 2011.

Diem and Julie are hosting a Strike Out Cancer fundraiser at Woodland Bowl, 3421 E. 96th St., Indianapolis, from 7 to 10:30 p.m. Feb. 24. The funds raised will benefit the pediatric cancer research fund at Peyton Manning Children’s Hospital.

Diem said when he got to that first golf outing and learned of its mission, it seemed like a natural fit.

“My wife and I were looking for some cause to get behind, and this one kind of found us,” Diem said. “I discovered how severely underfunded pediatric cancer research is, and it’s so hard to see children struggling, especially now that we have three healthy kids. To think of what those families are going through continues to drive us to do as much as we can.”

Diem, who said more than $1.3 million has been raised by Allie & Friends, said he and Julie will always support the cause in some capacity. A golf outing, called Ryan Diem’s Allie & Friends Golf Classic, is held each May in the Chicago area.

Diem said he hopes the bowling tournament will become an annual event.

“This is the first go-around but things are coming together nicely,” Diem said. “We’ve had some good support. Northwestern Mutual is our presenting sponsor. Not only have they stepped up in a financial way but in a volunteer way to lend some of their manpower to get the event off the ground.”

The entry is $100 for individual bowlers, including a gift bag. The team entry is $600 for up to six bowlers. There are various sponsorship packages. Non-bowling guests can pay $50 for dinner and drinks.