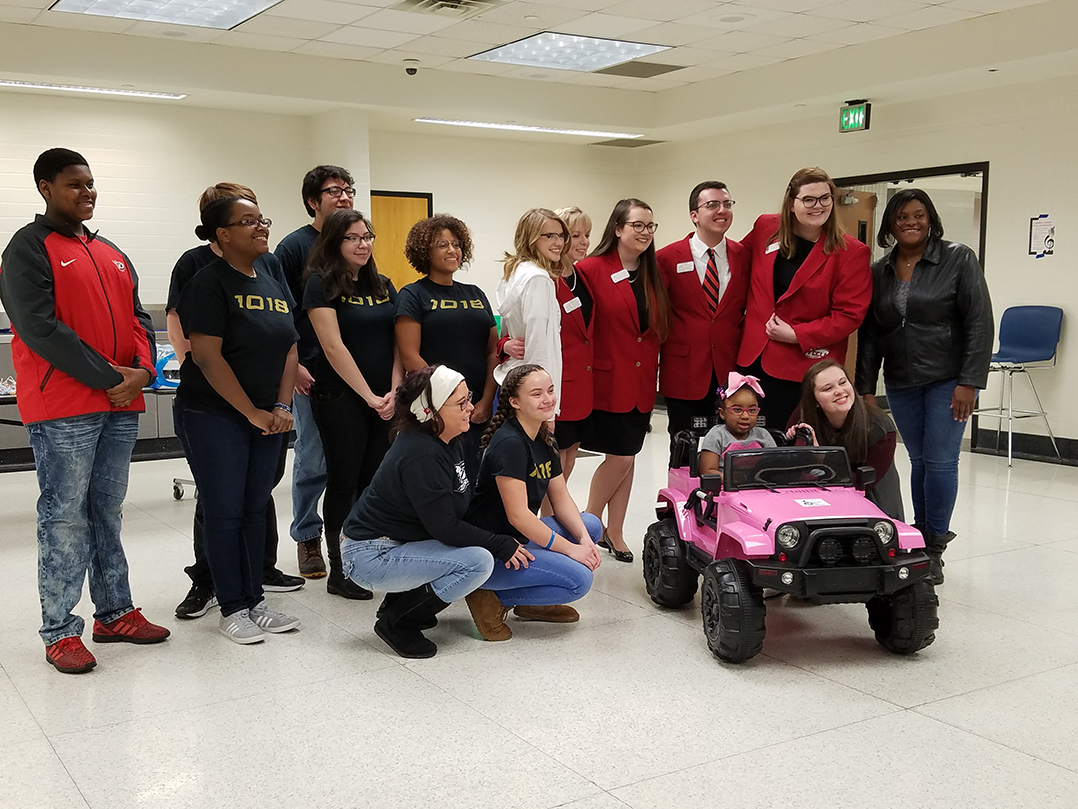 Danielle Rothchild, kneeling at right, pauses with a 4-year-old girl who received a toy power car. They are joined by members of the Pike High School robotics team, FCCLA students and the girl’s mother. (Photo by Christina O’Connell)

Carmel High School senior Danielle Rothchild has created an outfit made from shower loofahs, designed a dress out of bread tags and launched an organization to provide children with wheelchairs. Recently, she added another accomplishment to her list.

On Jan. 14, Rothchild presented a toy power car designed and adapted by Pike High School robotics students to a 4-year-old girl with spinal muscular atrophy. The crowd watched as the girl immediately took the car for a spin around the Carmel High School cafeteria.

The car donation was a result of Rothchild receiving a grant from Disney and Youth Service of America to host an event to promote giving in the community. Rothchild received the grant because of her efforts to collect nearly 2 million bread tags.

At the event, Rothchild  explained how her Danielle Cares for Chairs organization started after she created a dress out of bread tags for the Indiana Family, Career and Community Leaders of America student organization.

“I have been competing in a category called Recycle and Redesign for the past three years,” she said. “This past year I made a dress out of bread tags and I won a state gold medal and national gold medal, but that is not what mattered. What mattered is what it led me to.”

After using 5,000 bread tags to complete her dress, Rothchild was encouraged to use the remaining 40,000 tags she had collected. This led her to a South African foundation called “Bread Tags for Wheelchairs,” which exchanges bread tags at a recycling plant for proceeds for buying wheelchairs. This inspired Rothchild to create her own foundation, the first in the United States to collect bread tags for wheel chairs.

Her dress and all of her collected tags were laid out for guests to see. The tags were taken to the Carmel Clay Public Library after the event for public viewing.