The Indiana House Public Health committee voted in favor during a Jan. 29 session to increase the state’s smoking age from 18 to 21. A portion of the bill which would’ve hiked the state’s cigarette tax by $2 a pack was removed before the final vote was cast. 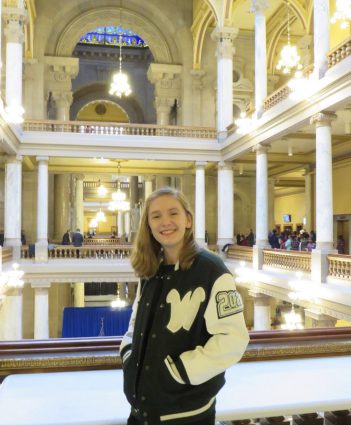 However, after House Speaker Brian Bosma made a procedural move to recommit the vote at the House Ways and Means Committee, the bill was killed in the committee in a late Jan. 30 session.

Westfield High School sophomore Sydney Clifford was one of six people to speak before the Indiana House panel, which voted in favor of the measure just days earlier.

“Nowadays kids are starting earlier than 18. Today our schools are dealing more and more with the problem of e-cigarettes and juuls,” Clifford told the panel. “In my own high school, nicotine detectors have been installed in the restrooms to prevent kids from vaping during or between classes.”

The realities of tobacco abuse hit home for Clifford, who said her passion on the topic was driven with how the drug has affected some of her relatives.

Clifford said she stands behind her comments, despite the bills ultimate failure.

“I completely still stand behind it,” she said. “By it passing the committee, though it may have not passed now there are still ways we can get it through the house.”

Clifford met with representative Donna Schaibley and senator Victoria Spartz about her concerns with under-age use of cigarettes and juuls. Both said they “have not heard anything about this.”

That’s when Clifford said she saw an opportunity.

“To let our legislators know what is truly going on, and I eventually was invited to testify,” she said. “I talked about how tobacco has negatively affected my family and how tobacco use and juuls are affecting those in our schools.”

Clifford said she often notices adolescents posting videos of themselves on social media, and even walking outside of school or neighborhoods blowing out vape smoke. She said the stigma around high schoolers speaking out has to change.

“In a lot of cases you don’t have youth standing for the very legislation that can affect us,” she said. “To give youth a specific perspective to legislators is something we cannot take for granted. By youth getting involved in politics and for my peers to be able to see that, that’s going to get more people around my age to get involved in legislation that’s going to affect them.”

Clifford said adolescents do not understand the harmful effects tobacco could be causing at a young age.

“Seeing how at this time right now kids don’t see the total effects of tobacco,” she said. “And if you’re advocating against it (you’re) a party pooper, the youth are more focused on what they see in the moments and not future effects.”

The measure, which was originally introduced by Democratic Rep. Charlie Brown of Gary, would have forced the state’s tobacco and retail shops to raise and mandate the minimum smoking age. Bill 1380 would have added Indiana to five other states with similar tobacco laws.

But for Clifford, she said standing on the right side of the aisle for pivotal issues will only garner additional incentives in the future.

“I know in these moments kids are scared to stand up for what is right,” Clifford said. “We need the youth to stand up on these hard topics even when their peers are not, so that in the future we can have a healthy population.”