For a group of Carmel High School Applied Music students, a trip to New York was far more than just a chance to see the sights. 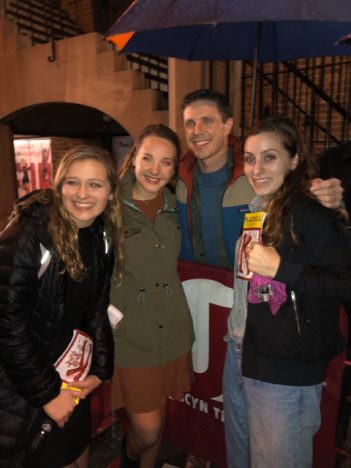 The students saw four Broadway shows: “Waitress,” “Kinky Boots,” “Come From Away” and “Once on This Island.” The students visited Radio City Music Hall and the 9/11 Museum. They attended backstage workshops as well.

“I absolutely loved the workshops we did with the Broadway performers,” junior Laney McNamar said. “We learned a dance from ‘Once on This Island,’ and once we had the steps down, the cast member we were working with pulled me up to do it alone with him,  which was very cool. I also got the chance to sing a solo in front of them, which was very helpful because I received feedback on what to improve.”

Senior Hannah Paul and junior Jessy Voris found the workshop experience to be special as well.

“The backstage workshop was a highly valuable experience as I not only received feedback on my personal performance, but also had the chance to learn Broadway-level choreography and hear, on a more personal level, about a day in the life of Broadway performers,” said Paul, who enjoyed hearing the experiences of the actors.

Voris said she valued the opportunity to get advice from actors and “hear about their journey to Broadway, which is very inspiring for any young person considering going into this business.”

Paul, Voris and McNamar all agreed “Once on This Island” was their favorite of the four shows.

“The cast was jam-packed with so much talent, especially Hailey Kilgore, who made her Broadway debut playing the lead, Ti Moune,” McNamar said. “It was set as a theater-in-the-round style, so the stage was surrounded by the audience. This made it feel so much more intimate, as if the cast was telling a story around a fire of some sort. The direction was incredible as well as the tech and costuming. Every element of the show was breathtaking from start to finish.”