You are at:Home»Current in Zionsville»Zionsville Community»Zionsville woman thanks Fishers Good Samaritans

Many pet owners consider their furry friends part of the family and Zionsville resident Margie Kilgus is no different in her feelings toward her young Labradoodle, Toots. So, when Kilgus took Toots to Parkside Animal Hospital, a veterinary clinic in Fishers, and Toots was spooked and slipped out of her collar, running onto Ind. 37, Kilgus was terrified. 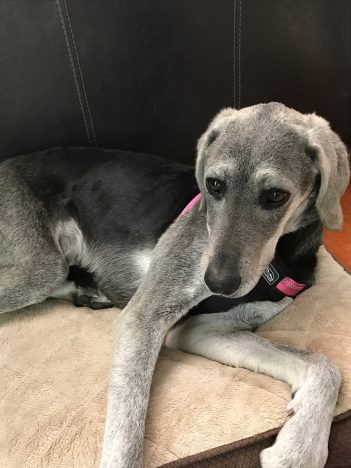 Toots is a young Labradoodle who was spooked at the vet’s office and ran away. She was recently found and is pictured with her new harness. (Submitted photo)

Kilgus called for help and she and a vet tech began chasing Toots down Ind. 37, a highly-traveled highway. A stranger pulled over to ask Kilgus if she needed any help.

“A man stopped with a truck and asked if it was my dog and said ‘get in,’ and so I trusted him and did,” Kilgus said. “He drove me around for over an hour looking for her. The vet tech also got picked up by somebody farther down 37 and saw Toots get hit by a car on her back leg. Apparently, it wasn’t really bad because Toots kept running and veered off onto 116th Street.”

Over a three-day period, when the night temperatures were subzero, Kilgus’ son came to help, her friend assisted her as well as many strangers. Fishers residents heard of the story and shared where they had last seen Toots on social media. Some even set out food for the runaway and tried to approach the dog, but Toots remained out of reach.

On the third day, Kilgus received a tip and followed it, finding Toots in a large fenced field.

Toots only had a minor soft tissue injury and some damage to her paws from all the running. She is now safely at home and recovered.

Kilgus is happy to have her dog back, and she’s learned something from the experience.

“I’m just so thankful, I used to be a critic of social media. I thought it’s crazy all the time people spend on their phones, but I could never criticize it ever again. That’s the only way I got her back,” Kilgus said.

She also learned of a good suggestion from the veterinary clinic on properly leashing a dog.

“They say it’s a good idea to have two leashes, one to a collar and the other to a harness, in a busy parking lot,” she said.