You are at:Home»Current in Carmel»Carmel Community»Suburban Indy Shows returns to Grand Park for spring display

The show was founded by Donell Herberer Walton after a similar company that produces flower and Christmas shows at the State Fair Grounds was sold. 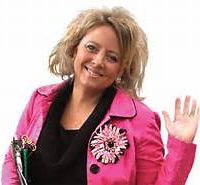 “Taking my advertising agency, some of my staff, myself and taking the shows, we moved from the fair grounds to the north side,” Walton said. “(Suburban Indy Shows) is similar to the types of shows (at the fairgrounds). Fall was the first show I produced in September, and it was a great success. The biggest comments we got is, ‘It’s so clean, people are so friendly,’ and the free parking was a big deal to people. It wasn’t jam-packed with people so they got to talk to businesses and business owners they want to talk to and need to talk to about their projects.”

Walton said the exhibitors also enjoyed the setup because they weren’t speaking with people residing in cities they didn’t want to travel to for business.

Two hundred exhibitors, including Blackhawk Winery and a variety of handmade products vendors, will attend the spring show. Walton expects between 10,000 and 15,000 visitors during the span of the show. The shows at the fairgrounds often exceeded 450 exhibitors.

“These are much more concentrated. You don’t have to spend an entire day at the show,” Walton said. “People’s time is very valuable. You can spend a couple hours at this show and talk to the people you need to talk to. The exhibitor base is based in Hamilton County, Hendricks County, Boone County and Hancock County.

“If you want to work with someone who is local to you, they will be at this show. It’s the business owners based on the north side of town because that’s where they want to do business with their neighbors.”

Walton said spring shows are typically larger than fall shows because people have been cooped up during the winter and want to get out. The spring show will feature additions such as a kids’ day Feb. 11. Giveaways also will be added throughout the four days.

Tickets are $10. Ten percent of the ticket revenue will go to the Boys & Girls Club of Noblesville.

Walton encourages attendees to bring a to-do list while speaking with businesses at the show.

“It’s a great place to get started because it’s nice to talk to someone who can help you start,” she said.