You are at:Home»Current in Fishers»Fishers Business Local»University of Indianapolis professor addresses economy at OneZone 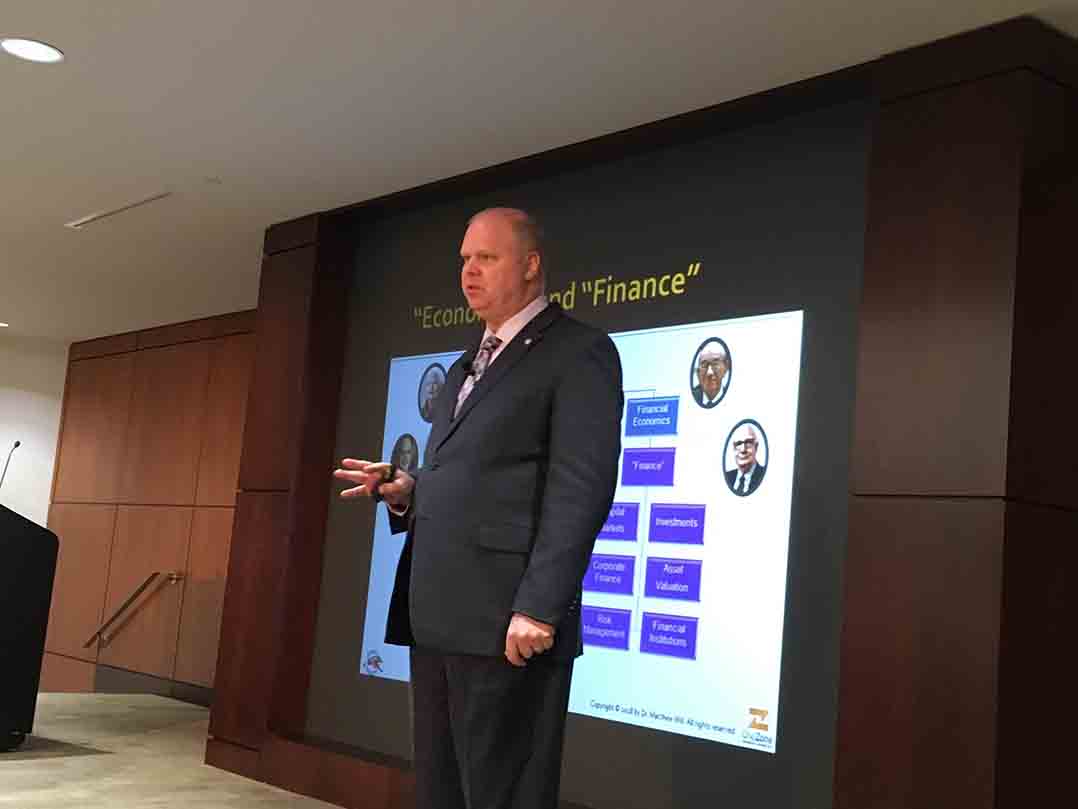 Dr. Matt Will sees positive and negative economic factors which will affect the economy if President Donald Trump is able to enact all his proposals.

Will, a financial economist and University of Indianapolis business professor, shared his views at the OneZone chamber luncheon Jan. 10 at Forum Conference Center in Fishers.

Will supports the rollbacks of some of the regulations under Trump.

“Regulations cost money, and I’m not talking just taxes,” Will said. “There were 20,000 regulations under Obama, the most in history. The second most was Bush II (George W. Bush). We’ve had 16 years of massive increase in regulations. The cost of this is not taxes.”

Will said there are justifiable regulations. However, he said repealing the Dodd-Frank Wall Street and Consumer Protection Act, which puts major regulations on the financial industry, would boost the company. The U.S. House of Representative voted to kill Dodd-Frank in June, but it remains stuck in the Senate, Will said.

Will said the result of the regulations was a loss of productivity and wages.

“This was a jobless recovery and income-less recovery,” Will said. “We’re just now getting over it.”

Will said the recently passed tax bill that lowers the corporate tax from a top rate of 35 percent to 21 percent should benefit the economy.

“These will be three things that will happen and they are all good,” Will said.

Will said the tax code encourages companies to bring the profits back to the U.S.

“If you make profits overseas, you can bring it back with no tax, pretty cool,” Will said. “There is a nice incentive to bring money back. There is a real incentive in the tax code to make stuff here and make profits here.”

However, Will said the problem is there is a labor shortage.

“We don’t have skilled labor, especially in the STEM (Science, Technology, Engineering and Math),” Will said.

Will pointed out Indiana is a huge beneficiary of free trade.

“We get a ton of money from other countries coming to our state,” Will said.

However, Will is concerned with the 35 percent import tariff Trump wants to impose on U.S. companies making products outside the U.S.

“Meaning if you are Ford and you move a factory to Mexico to build cars and you bring the cars back, (Trump) wants to charge you 35 percent. Ouch,” Will said. “He wants to renegotiate NAFTA (North American Free Trade Agreement). He wants to change the World Trade Organization. He wants to enforce intellectual property rights. He wants to deal with government subsidies and currency manipulation.”

Will said if Trump is unable to enact the tariff and cut back on immigration, it will have a negative impact.

“Those two things will reduce growth, and they will cost you more,” Will said. “They will reduce productivity.”

Will said two things are necessary to grow the economy.

“You need productivity and you need people,” Will said. “If we are totally flat on our productivity, unless we have more people, we can’t grow. We want safe immigration. I’m a fan of skilled immigration.

“I love what (Purdue president) Mitch Daniels said, ‘When you get your degree, it should come with a green card.’ So, if you get a Purdue engineering degree, you get to stay. If we don’t have immigration, we will not grow.”