You are at:Home»Current in Carmel»Carmel Business Local»Sahm’s Ale House to open soon in Carmel’s West Clay

West Clay will soon have a new option for eating out.

Sahm’s Ale House West Clay is set to open in Carmel in late January, Eddie Sahm said, although a specific date has not been announced. 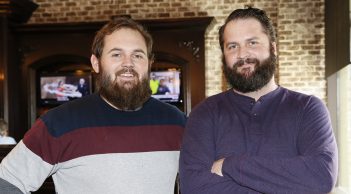 Sahm is co-owner with Scott Ellis and his father, Ed, who started the first Sahm’s restaurant in Fishers in 1986.

The West Clay restaurant is moving into the previous site of the now-closed The Lit Moose, 12819 E. New Market St.

“We took over their lease and are remodeling the property,” Sahm said. “We’re doing a few changes to add some seats so we’ll be able to add about 20 seats inside.”

Sahm said the restaurant will likely seat 125 guests inside, not counting outside where several seats can be added when the weather is nice. Sahm said there may be room to expand in the future.

“We’d like this to be a nice little gathering spot for the neighborhood and for Carmel,” Sahm said. “We’ll give it time and see how it plays out.”

Sahm’s Ale House Monon is next to the Big Lug Canteen, which also is a Sahm’s restaurant, in the Nora area of Indianapolis. Ellis is the brewmaster for Big Lug.

Sahm said the new restaurant will feature eight Big Lug lines and 12 lines from other local, regional and national breweries. Sahm said it won’t have American domestics such as Miller Lite or Budweiser on draft, but the beers will be available in bottles or cans.

Sahm, who lives in Broad Ripple, said the alehouse hired a few staff members from The Lit Moose. He expects the West Clay restaurant will have 30 to 35 employees.

“Everyone seems open and friendly to other people coming in and enjoying the neighborhood,” Sahm said. “(West Clay residents) have been receptive to us being there and receptive to the idea we are there for everyone. We want it to be a fun, exciting spot for the people of Carmel, not just West Clay.”

The hours will be 11 a.m. to 10 p.m. Monday through Thursday. Sahm said it might be open until approximately midnight Friday and Saturday depending on the crowd. He said it will be open 10 a.m to 9 p.m. Sundays, starting with a brunch buffet.