You are at:Home»Current in Zionsville»Zionsville Community»Bop to the Top aims for fundraising milestone

As participants strive to climb 780 steps to reach the pinnacle of the One America Building in downtown Indianapolis, Bop to the Top organizers are aiming for a milestone of their own: $750,000 raised for Riley Hospital for Children since the event began 35 years ago. 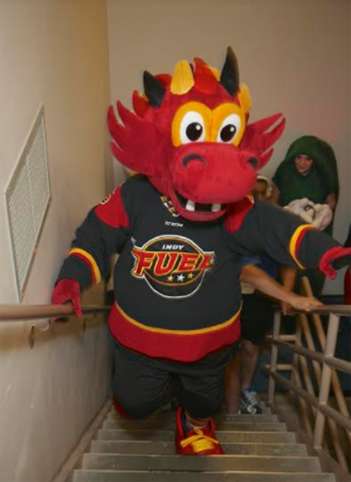 Indy Fuel mascot Nitro participates in the 2017 Bop to the Top. (Submitted photo)

“It adds up over the years,” said Don Carr, president of Zionsville-based Tuxedo Brothers, which has run the competition since its inception.

Participants of all ages will be timed as they climb 36 floors or approximately 500 feet. The event kicks off at 8:30 a.m. Jan. 20 with competitors being released one at a time on two staircases every 15 to 20 seconds.

Registration for this year is slightly ahead of last year, said Carr, who expects more than 1,000 participants at the event. Participants may register at tuxbro.com or on site the day of the race through 11:30 a.m. Participants are encouraged to conduct additional fundraising for the cause.

Most events coordinated by Tuxedo Brothers are the more traditional 5Ks or triathlons, but Carr, a Zionsville resident, said the annual stair-climb event has at least one major perk.

“We don’t ever have to worry about the weather,” Carr said.