You are at:Home»Current in Carmel»Carmel Community»Carmel reveals name, design of luxury hotel 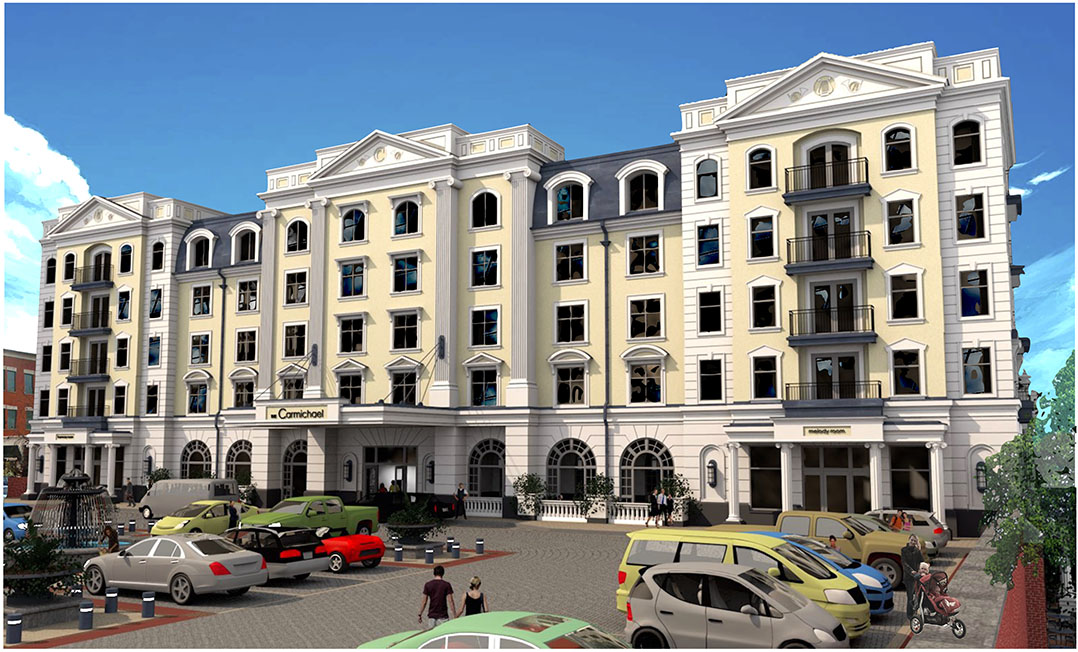 A rendering of Hotel Carmichael, which will be developed in Carmel City Center. (Submitted photo)

The City of Carmel has released architectural designs of the soon-to-be constructed luxury hotel in the Carmel City Center area right across from The Palladium.

Hotel Carmichael is a combination of the word “Carmel” and “Michael,” after Michael Feinstein, Grammy-nominated performer and artistic director for The Center for the Performing Arts, who will have a nightclub inside the hotel.

“I think it’ll be a great place for people to enjoy a night out,” Carmel Mayor Jim Brainard said. “I could see people having dinner at a local business and then going to watch some music at the Feinstein Club.”

Hotel Carmichael possibly could be an Autograph Collection hotel by Marriott, which is a prestigious brand with high average occupancy rates. Negotiations are underway to try to make that happen.

There are more than 100 Autograph Collection hotels worldwide. The brand launched in 2010, and each hotel is independently owned and has its own character and look but all are described by Marriott as “unique in design and thoughtful in spirit.”

Current plans call for the 106,347-square-foot building to house 122 rooms, a restaurant, a private dining space, an outdoor dining space, three bars, a ballroom, meeting spaces, a business center and a fitness center. There will be a valet and 24/7 room service. It does not include a swimming pool.

One of the biggest attractions will be the Feinstein Club, a music lounge with live entertainment every week if not several nights a week. It’s a concept that Feinstein has done in New York City in the former Studio 54 space. There it’s called Feinstein’s/54 Below and most evenings it features two shows. Broadway singers and recording artists perform there on a regular basis, such as Feinstein, Justin Guarini, Micky Dolenz and Annaleigh Ashford.

Brainard said there’s room to easily build and add onto the hotel if it’s successful.

Previously, the Carmel Redevelopment Commission agreed to pay Oklahoma-based Coury Hospitality $20,000 a month to lure a luxury hotel to Carmel by 2020. The goal was to attract a unique brand, specifically an Autograph Collections hotel by Marriott. The Carmel City Council approved funding for the hotel, which would be a joint private-public partnership with Pedcor. Brainard said he the hotel isn’t city-owned but he sees the city as an investor in this private development.

Brainard said the hotel will pay for itself in several ways. First, the revenue from the hotel will partially go to the City of Carmel every year after making mortgage payments. It can be used to either pay off additional debt or invest in other projects. In addition, he said there’s a multiplier effect where hotels like this often boost city revenues for sales tax of neighboring businesses, property value and taxes for nearby properties and food and beverage taxes for local restaurants. Also, the hotel bed tax can be used to support local tourism.

The CRC would help pay construction costs and back up the mortgage loan payments. Pedcor would likely be the ground tenant and joint owner, along with the CRC. Shiel Sexton would handle construction. Coury Hospitality would serve as a consultant, developer and hotel operator.

Previously, some Carmel residents asked why the City of Carmel needed to get involved in helping lure a luxury hotel. Brainard responded that investors want such a high return on investment that they wouldn’t put up the money needed. He said the City is happier with a much smaller return on investment and so it makes more sense.