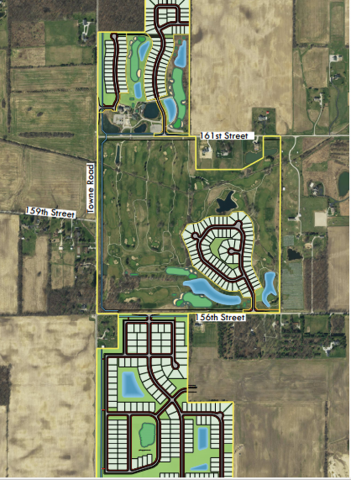 The Westchester planned unit development encompasses approximately 309 acres and is capped at 340 houses. It was approved by council, 5-2, at the Jan. 8 meeting. (Submitted image)

Jon Dobosiewicz, a managing professional with Nelson and Frankenberger, presented updates on the Westchester PUD at the council’s Jan. 8 meeting.

Last minute changes included no single builder being able to build on more than 50 percent of the lots in one area, requiring a minimum of three builders per area in the PUD, and a requirement the predominant exterior of the building material on the front elevation be carried around to a percentage on the side of the home, a percentage to be determined by the builder.

Dobosiewicz said during his presentation finalizations were made the afternoon of Jan. 8, but the discussion originated in a meeting the previous weekend. The meeting was not advertised to the public.

When council member Joe Edwards learned of the meeting, of which he had not been invited to, he was immediately displeased with the way it was handled.

“This is not the way we want to do business,” he said. “It should be done in the light of day.”

Council president Jim Ake interjected and explained to Edwards that inviting residents into a discussion with developers was vital to working through problems in the proposal. Council vice president Chuck Lehman said he organized the meeting because he wanted people to have their questions answered.

“I reached out to be proactive to see if solutions were out there,” Lehman said. “If somebody wants to criticize me to do that, then you have at it, but we are out there listening, asking questions and responding to the public.”

“This should not be a ‘let’s make a deal’ outside of the public view,” Edwards said. “That’s what public business is for. Pure and simple. You didn’t ask me what I thought about it.”

Council member Steve Hoover voted in favor of the proposal, and he seemed to have no issue with the weekend meeting.

“You can’t do everything in a public meeting, there are discussions outside of public to get a process, to get a product to point of getting a vote,” he said.

Council member Cindy Spoljaric agreed with Edwards in saying she wished she had more time to digest the new information before making a vote.

“I have to say I do agree with Joe, and while I appreciate council leadership taking action, getting new information when a vote is expected I don’t like that at all,” she said. “I like to digest and really think about this. That’s what bothers me is this eleventh hour stuff.”

Despite a 6-3 negative recommendation from the Advisory Plan Commission, the council approved the proposal, 5-2, with Edwards and Spoljaric voting against.

Ake released an official statement Jan. 9 regarding his decision on the meeting. The statement reads:
“At the request of a resident I assisted in convening a meeting with residents on Saturday morning Jan. 6, 2018. At this meeting, the developer, the township trustee, the Woodwind Golf Course representative, the Council representative for that district and a member of our APC were also in attendance. I coordinated this meeting as an At-Large Councilor to meet with constituents who had concerns about items that had previously been brought up in public meetings.
“After Saturday’s meeting, suggestions from concerned residents were put in writing for the developer to address. It was then up to the developer to respond to those concerns prior to Monday night’s Council meeting.
“This is the third developer to bring forth a proposal that was met with opposition in the last three years. If a decision was not made soon the Woodwind golf course would close taking away Westfield’s only public golf course. In order for a development to move ahead, I wanted to do what was best for the residents, which is why this meeting was so important.
“As an elected official it is my responsibility to assist with the growth of the community while taking into considerations the concerns of our citizens.”