You are at:Home»Current in Zionsville»Zionsville Business Local»Zionsville’s Dalberg aims to increase impact of Endangered Species Chocolate

His office smells like chocolate, and there’s a test kitchen down the hall. Yet, what seems to appeal most to Tod Dalberg in his new job is the company’s policy to donate 10 percent of profits to charity. 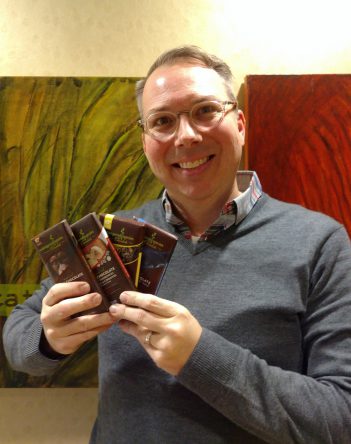 “The company always has been centered around a give-back,” Dalberg said.

The Zionsville resident recently joined Indianapolis-based Endangered Species Chocolate as director of brand and marketing with a goal to increase awareness and sales of the specialty chocolate so the company can increase its donations to $1 million annually.

“This has been a culmination of my whole career,” Dalberg said.

Beginning with an internship with The Salvation Army in Ghana during college, Dalberg wanted to do something philanthropic. He serves on the advisory board for The Salvation Army locally but his career veered from charity to retail and brand marketing. He has worked with Simon Property Group, Musicland and Paradies Lagardere, developing marketing programs and customer segmentation.

Dalberg said Endangered Species Chocolate has experienced “organic growth” since launching nearly two decades ago. He intends to bring the company to the next level by “expanding the  number of people tasting our product,” he said.

“Our goal is to carve out a solid niche for us and continue to grow at a double-digit rate,” he said.

Although the chocolate has focused on small grocery settings in the past, Dalberg plans to find some non-traditional channels and increase local awareness.

Although the natural chocolate segment has grown significantly the past decade, Dalberg is confident Endangered Species Chocolate will continue to increase donations to endangered species causes.