You are at:Home»Current in Carmel»Carmel Cover Stories»Season of love: Carmel couple to celebrate 60 years of wedded bliss 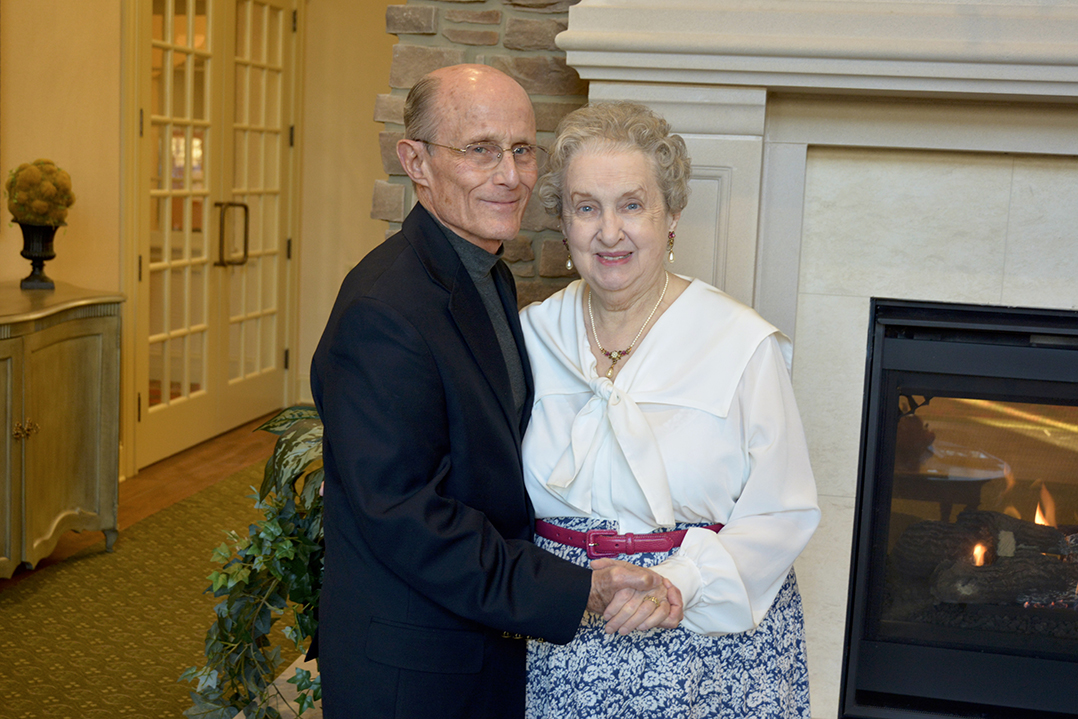 Carmel residents Sam and Wilma Preissler are preparing to celebrate their 60th wedding anniversary. They met at Hobart High School and married on Dec. 21, 1957. (Photo by Lisa Price)

Wilma Preissler had always wanted to be a Christmas bride.

She got that wish Dec. 21, 1957, when she married Sam Preissler in their hometown of Hobart.

“It was a beautiful day, and then about 7 o’clock when the ceremony started, snow started falling,” Wilma said. “It was beautiful. We decorated the church with white Christmas trees.”

The couple, who live in The Barrington of Carmel, will celebrate their 60th holiday anniversary this month. They recently went on a Caribbean cruise to celebrate.

Sam and Wilma, both 82, became close when their lockers were next to each other during their junior year at Hobart High School.

“I started carrying her books to classes,” Sam said.

After the couple graduated from Hobart in 1953, Wilma went to nursing school in Chicago.

“Sam would come every weekend carrying chocolates and took me out to dinner,” Wilma said. “It made the first year very comfortable.”

In November 1954, Sam enlisted in the U.S. Army and spent three years serving his nation.

“It took an extra year of service, but I took the G.I. Bill (providing educational funds), which came in handy because after I got out of the service I decided to go to college,” Sam said.

Sam was stationed in Germany and then northern Italy.

“I didn’t see him for a couple of years, but we corresponded,” Wilma said.

After graduating from Hobart, Wilma served as a courier nurse on passenger trains with the Santa Fe Railroad.

“I made three trips to California every month,” Wilma said.

“After my sister and her husband took the children home, he asked me to marry him,” Wilma said. “All I had heard for the last hour was trick-or-treat, so I thought it was a joke.”

After marrying, the couple lived in Valparaiso. Sam attended one year at Valparaiso University and then went to the Indiana University branch campus in Gary before heading to Bloomington to major in marketing.

Sam worked in retail for Lazarus department store in Columbus, Ohio, for a short time before finding his true calling.

“I was always a car junkie,” Sam said. “I sent my resume to Ford company and I got hired in Indianapolis, and we have been here ever after. I retired from Ford in 1997 (as superintendent of manufacturing and quality control). We spent 43 years in our first and only house in Indianapolis.”

Wilma spent more than 20 years as a school nurse at Heritage Christian School and served as a bus supervisor for a few years.

Janine Short, The Barrington marketing director, said the Preisslers’ love for each other is an inspiration. 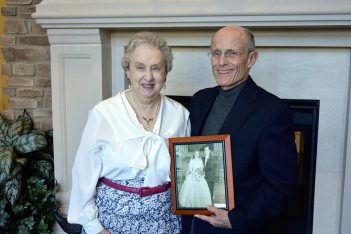 Sam and Wilma Preissler serve as unofficial ambassadors to prospective residents at The Barrington. (Photo by Lisa Price)

“Their love for one another is just as evident today as it ever was, and we’re privileged to witness their commitment to one another every day,” Short said.

Wilma said the couple learned quickly you have to share everything.

Sam said commitment to each other is everything in a marriage.

“There has to be a solution to every problem. There can’t be my way or your way,” Sam said. “Solve it right then and there because it’s not going to get any better by waiting.”

The Preisslers serve as unofficial ambassadors for prospective visitors at The Barrington. They were the third couple to sign up to live there in 2009 before it opened.

Sam is involved with Masterpiece Living concept, a national corporation and partner of The Barrington. The group’s mission is to help people age successfully.

“In this community, we had a team of residents and staff design a program so people who move in here don’t have to go anywhere and continue to upgrade their lifestyles,” Sam said.  “Science has said how you age is dependent on how you are active (socially, intellectually, physically and spiritually). We are going to have people who age better than they ever would on their own because they have to go someplace else and it would be too much trouble.”

“So, instead of throwing everything away when you are 82, you find a home for it,” Wilma said.

Short said the Preisslers are great spokespeople because they did all the research before joining.

“They can explain what life at The Barrington is like better than I can,” Short said.