It was a book more than 25 years in the making. 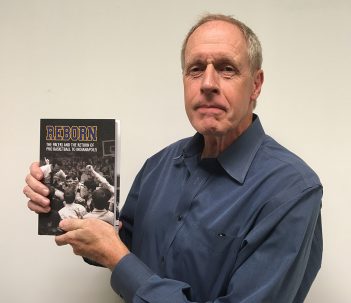 “Reborn: The Pacers and The Return of Pro Basketball to Indianapolis.” by Mark Montieth. The hardback book is available to Barnes and Noble stores, barnesandnoble. com and amazon.com. (Photo by Mark Ambrogi)

Mark Montieth began collecting interviews for a book in 1990.

“I was going to do a book about the nine years of the ABA,” he said.

At that time, Montieth was primarily a freelance writer with a stint working for a book publisher after leaving the Fort Wayne Journal Gazette. He began working for The Indianapolis News in 1994, which merged with The Indianapolis Star in 1995. The News closed in 1999.

“I became the Pacers beat writer in 1996-97, and there was no time for it,” said Montieth, a Fishers resident. “When you did get time off, you didn’t feel like working on a book. So, I would pick it up and then put it down. I was able to use some of my travel for the beat to interview some people. Once, when the Pacers played at Minnesota, I went over to George Mikan’s house.”

What happened is, Montieth gathered lots of interviews but had way too much for one book.

Finally, he settled on the start of the Indiana Pacers franchise and the return of pro basketball to Indianapolis. The book “Reborn” was released in September.

“I wanted to get something out this season for the 50 years,” said Montieth, who left The Star in 2008 and has written for Pacers.com since the 2012-13 season. “So, I narrowed it down to the formation since I had so much material from that.”

The book is Montieth’s second. His first was “Passion Play: A Season with the Purdue Boilermakers and Coach Gene Keady,” which was released in Nov. 1, 1988.

“I’m prolific, huh?” Montieth joked. “A book is an easy thing to put off when you have a job and other things going on.”

Montieth said he was lucky to get the files of John DeVoe, one of the founders and second team president. DeVoe died of a heart attack at a Pacers’ home game in 1968.

“I got his scrapbook with stories from all over the state from his brother, Chuck,” Montieth said. “That gave me some real insight on how the franchise and the league came together.”

Fortunately, through the years Montieth transcribed the interviews as he went along.

“I had computer printouts of everything and I had them on floppy discs,” Montieth said. “A couple of the printouts I lost. They weren’t crucial but they would have been nice to have. Someone like Mike Storen I talked to a half-dozen times, both in person and on the telephone.”

Storen was the Pacers’ first general manager and later commissioner of the ABA.

Montieth said he wants to write two more books, one on the pro teams before the Pacers and another on the Pacers’ three championship seasons in the ABA.

“With those early years, you’re talking about guys that drove to games in cars. They would get home at 4 in the morning and get up a couple of hours later and go to work,” Montieth said.

The Olympians featured stars Ralph Beard and Alex Groza, who were banned from the league after the University of Kentucky point-shaving scandal.

Oliver Darden left Michigan law school to play for the Pacers on their first team. Darden, who played collegiately for Michigan, was a third-round pick of the Detroit Pistons in 1966 but was unimpressed with the offer.

“It was very informative,” Darden said. “There were many things I was not aware that were behind-the-scenes. There were some very good stories or anecdotes of various players.”

Darden, a 73-year-old Ft. Lauderdale, Fla., resident, played that first season with the Pacers. After playing with the New York Nets and Kentucky Colonels, he returned to the Pacers for the 1969-70 season.

“Mark has inspired me to write a book of my own,” Darden said. “It’s easier talking about it. Writing it is hard.”

What: “Reborn: The Pacers and The Return of Pro Basketball to Indianapolis.”

For more: The hardback book is available to Barnes and Noble stores, barnesandnoble.com and amazon.com.