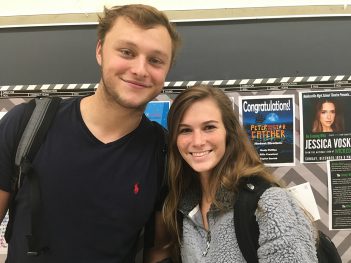 “We always watch movies on the weekends,” Schmidt said. “I took this (filmmaking) class, and now there is an opportunity for us to make our own movie. It’s pretty cool.”

Professional filmmakers John Armstrong and Zachary Spicer presented their Project Pigasus, a statewide scriptwriting contest for high school students, at CHS for the second year. The deadline for the Project Pigasus short screenplays is Jan. 25. It’s 12 pages of script, and Armstrong said the films are eight to 10 minutes long.

“We’ve been talking to classes, the Department of Education and social media,” Armstrong said. “We’re trying to spread the word and get as many entries as possible.”

Armstrong and partner Zachary Spicer showed the 2017 winner, “Through the Window,” during their recent visit to Carmel High School. The film by Madison High School is available to view on pigasuspictures.com

“I was definitely intrigued when I heard they were coming to talk to us about their program for high school students,” CHS senior Lacey Farrow said. “I may enter the contest. I have to think about a story first. I might try to get a partner to do it with me.”

Schmidt said he asked a lot of questions and is considering writing a script with a friend, too.

Armstrong said there were about about “60 entries from Elkhart to Evansville” last year.

“We pick through and pick our finalists and give them to Paul Shoulberg, who has written and directed our last two features and get his take on that,” Armstrong said. “Paul engages the student in a series of rewrites to get the shooting scripts. We cast some people from around the state.”