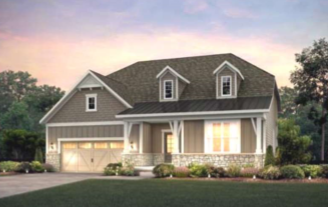 Homes in the development’s empty nester area are proposed to have the character of this one. (Submitted photo)

A new neighborhood and mixed-use development has been proposed on the 235-acre site of the defunct Wolf Run Golf Club in north Zionsville, but many who live in the area are concerned the project is not a good fit. 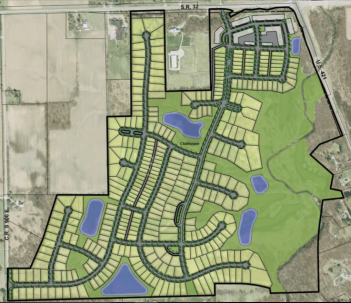 A development including up to 360 homes and mixed uses on 10 to 12 acres has been proposed on the 235-acre site of the Wolf Run Golf Club. (Submitted photo)

Plans submitted to the Town of Zionsville state that the Wolf Run Community on the southwest corner of US 421 and SR 32 would include a maximum of 360 single-family detached homes, mixed-use buildings with retail and offices or up to 200 multi-family housing units, a clubhouse of at least 3,000 square feet, walking trails and a swimming pool.

Petitioner Stan Burton is requesting a rezoning from Rural R-1 Residential to a planned unit development to accommodate the project. The Zionsville Plan Commission will meet at 7 p.m. Dec. 18 at Town Hall to discuss the proposal.

Burton, owner of the golf course, compared some aspects of the proposal to the Village of West Clay in Carmel, a large development that features homes of various sizes and retail. It’s designed with specific areas for estate, village and empty-nester homes.

“We are trying to build a neighborhood that Zionsville can be proud of,” Burton said. “We hit a wide range of price points within the neighborhood, which gives us a great ability to build a community within our community.”

But many residents who live near the proposed development site have expressed concerns ranging from increased traffic to overcrowding at Union Elementary School.

“It just takes away our rural setting,” said Brandon Toney, who has lived in the area since 2004. “It’s not what we want up here.” 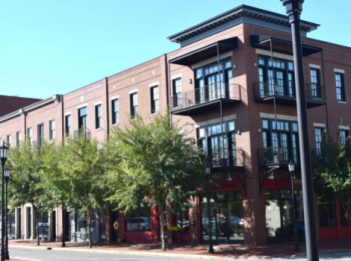 The applicant submitted this photo to the Town of Zionsville as an example of the character of buildings proposed for the mixed-use district. (Submitted photo)

Zionsville Town Council member Bryan Traylor, who represents the area, said he expected the site to attract developers once the golf course closed, but he said the proposal is “way off the charts for that area.”

“I was surprised by the magnitude of it. (The proposal) is really aggressive,” Traylor said. “I was really surprised a developer would put this together and honestly think it was going to be acceptable.”

With the nearest neighborhood with comparable density 3 miles away, Traylor said the timing isn’t right to develop the site as proposed.

“Looking at the surroundings right now, this project just does not fit into that area,” Traylor said.

Burton said he understands that residents who live near the golf course will likely be disappointed with development of the site, no matter what is proposed.

“Anything I would do to change it, I would expect the neighbors not to be happy about the change,” he said.

But he noted that development will eventually make its way north on US 421 whether the project happens or not. He said the 10 to 12 acres in the northeast portion of the site near the intersection of US 421 and State Road 32 will be the only area that allows mixed uses – including the potential apartments—and that they will be the final structures built.

Burton envisions the mixed-use section to have a similar feel to downtown Zionsville, with restaurants and retail on the ground level and offices or apartments on upper levels.

“We envision that 10- to 12-acre area being a community center not only for our community but also the surrounding communities as well,” he said.

Residents opposed to the project have hired an attorney and launched a GoFundMe page to raise support for their cause. It surpassed its goal of $15,000 in a week. View the STOP Wolf Run Development Rezone page at gofundme.com/wolf-run-development-rezone.