Akard True Value Hardware has finished a round of remodeling and rebranding in its Boone Village store. It has a central gift and impulse buys section surrounded by typical hardware items. 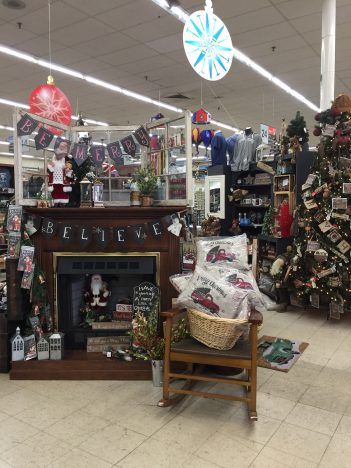 The remodel began in July 2016 after the Boone Village Marsh closed. Leigh Ann Akard said the store saw a decrease in visitors, which raised concern that customers could lose sight of the store completely.

“If they’re not coming to Boone Village already for some basic needs, they’re not necessarily coming here for everything,” Akard said.

Store officials reviewed what was and wasn’t working. Akard said they realized the internet was possibly the biggest competition rather than big box stores. In July 2016, Akard introduced a center section featuring small items for the summer and moved core hardware to the outer ring of the store with the goal of becoming a one-stop shop.

“We realized quickly how well it was going, and we went back to the drawing board and did even more reconfiguring of that center area so that we could gain more space,” she said.

The store adjusted again last year during Christmas and continues to update the area. Akard said they attend up to five buying markets each year to refresh the hardware, rental and gift sections.

Akard’s also has developed a new logo to better reflect the store’s relationship to the village rather than focusing on its position under the True Value Co. umbrella.

Akard said the store is looking forward to the future of the shopping center when Kroger opens, which is scheduled for Jan. 18.

“We are hoping that maybe (Kroger) will attract people who may have never been to Boone Village before,” she said. “We hope to be ready at the same time they are.”