You are at:Home»Current in Carmel»Carmel Community»Carmel Clay Public Library assistant director honored for service in many roles

Carmel Clay Public Library Assistant Director Nancy Newport was recently honored with the 2017 Indiana Library Federation Outstanding Librarian Award. The award honors and recognizes excellence and innovative leadership in the development of library services and for remarkable service to the profession. 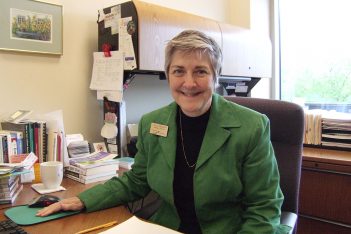 Newport has worked at CCPL since 2000 and became the assistant director a year later. CCPL Director Bob Swanay nominated her for the award. Nominees are reviewed by the federation’s awards committee and approved by its board of directors.

Newport’s service includes acting as the interim director for CCPL in 2015 and 2016. She has  served as the interim business manager during her time there and is the manager of the mobile library. Newport has written several articles for the American Library Association and the Journal of Academic Librarianship.

The long-time Carmel resident is proud to have been recognized by her peers.

“I feel quite honored,” Newport said. “You work hard, you try to do your best and people have noticed. That really affected me. I was so surprised. It meant a lot to me.”