You are at:Home»Current in Carmel»Carmel Community»Bedtime battle sparks book idea for Carmel parents

Most people with young children can empathize with the nightly battle to get a child to sleep. 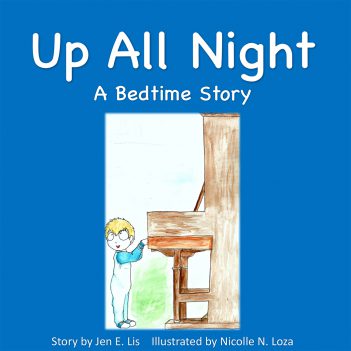 ‘Up All Night’ was inspired by a toddler who decided he didn’t want to go to bed. (Submitted photo)

Carmel resident Jenny Bryant decided to turn the ensuing hilarity into a children’s book, “Up All Night: A Bedtime Story.” The book is about a little boy who doesn’t want to go to bed, so he stays up all night. Most of the story centers on the child’s misadventures the next day because he is so tired.

“We have two boys and have found that life with kids is always an adventure, including so many elements and events with the potential for making an interesting book,” Bryant said. “Additionally, we love reading to the boys, so a book we could share with them seemed particularly fun for us.”

The idea for the book, self-published by Jenny and her husband, Eric, came last summer during a family meal, after a comment from Jenny’s oldest son, who was 2 1/2 at the time.

“He said something to the effect of, ‘I’m not going to bed, I’m just going to stay up all night.’ This led to a silly discussion of what crazy things he may do if he didn’t get enough sleep,” Bryant said. “After that, I decided to take some pictures of my son posing as if he were falling asleep in strange places or doing silly things like trying to put on his baby brother’s shirt, and made a Shutterfly picture and story book for him.”

The couple’s family enjoyed the book so much they encouraged them to turn it into something they could share with others. Jenny’s mom, a teacher at Cardinal Ritter High School, mentioned she had a student, Nicolle Loza, who was great at drawing and thought perhaps she could help.

“I saw some of her other work and was impressed. Nicolle and I got in touch and she came up with a few sketches,” Bryant said. “As soon as she sent them, I was hooked and so excited. I think her drawings really make this book. They are so fun and colorful, great for kids.”

Jenny has another children’s picture book planned but said it’s in the “very early stages” and wants to have it published in the next year.