You are at:Home»Current in Zionsville»Zionsville Community»Zionsville Road closure, public safety among topics at Mayor’s Night In 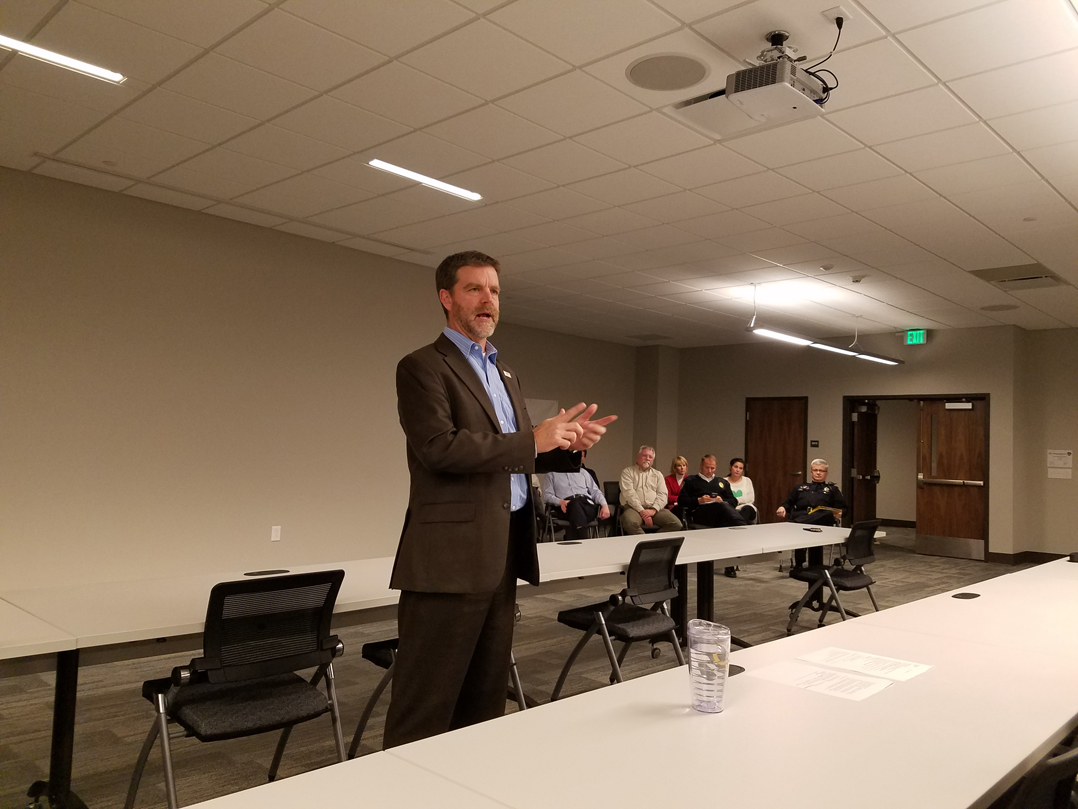 The town will continue its “aggressive” spending to upgrade and maintain streets, Haak said, with the next major project slated for the widening of Zionsville Road.

The road will expand from two to three lanes and include a bike path planned to extend to the Vonterra subdivision. The road is expected to be closed during construction, which will save $450,000 and allow the project to be completed two months faster, Haak said.

The town recently completed upgrades at the Zionsville Road and 96th Street intersection. Haak said it was not converted into a roundabout because of the high number of large trucks that travel through the area daily.

Thanks in large part to the county’s local income tax for public safety, Zionsville has hired 16 new firefighters and five police officers in the last two years.

“We were woefully short on public safety personnel,” Haak said.

The Zionsville Police Dept. recently graduated its first citizens academy class, and the Zionsville Fire Dept. will hold its annual citizens class in the spring. ZFD added a new ambulance this year and will add a new engine in 2018.

Haak said the town will add five emergency warning sirens throughout town in the next year.

The town recently sold Creekside Corporate Park, with closing expected to happen in January. Haak said the town is expecting to see interest from at least a couple of new tenants when the sale is finalized.

Haak said the town is in discussions to sell one parcel of land on the site of Zionsville’s former Town Hall building but that the other parcel won’t go on the market until a new road to divide the site is completed, likely in spring 2018.

Two potential Kroger stores are on hold, Haak said, because the grocer recently bought former Marsh stores in Boone Village and at 106th and Michigan. One store was set to be constructed at Pittman Farms, a development that has stalled as its sibling owners have taken disagreements about their properties to court.

“They’ve got to resolve their family squabble. It’s pretty sad,” Haak said. “That project would be open if it wasn’t for that.”

The mayor said the town will likely begin a study in 2018 to improve traffic flow in the downtown area.

The parks department is in the midst of a 5-year master plan update, with the next open house scheduled for 6 p.m. Dec. 14 at Town Hall.

It is also working to expand the Big 4 Rail Trail to connect to Whitestown. The long-term goal is for the trail to eventually stretch all the way through Boone County and end in Lafayette.

Haak also said that developers of the Vonterra subdivision are incrementally donating 43 acres along Eagle Creek to the town for a park that is expected to be complete within the next two years.

Haak said weather delayed the CR 700 pathway project, which will not be complete until spring. Another project on hold is upgrades to the pedestrian crossing at Oak Street and Ford Road. Haak said bids came in double what the town expected, so it will be rebid in the coming months to be complete next year.