You are at:Home»Current in Zionsville»Zionsville Community»Governor appoints Zionsville woman to new task force

Kim Milas knows the importance of being a self-advocate, and that’s led her to being appointed by Gov. Eric Holcomb to a new task force for people with intellectual and developmental disabilities. 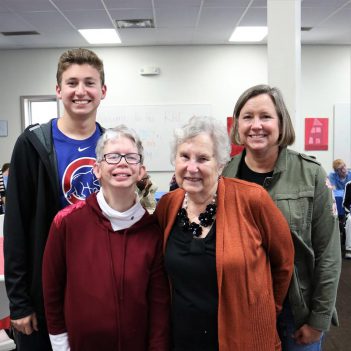 Milas, 52, has an intellectual developmental disability and began receiving day services at The Arc of Greater Boone County three years ago after moving to Zionsville to be closer to her sister. She has joined the Task Force for Assessment of Services & Supports for People with Intellectual & Other Developmental Disabilities.

Milas hopes the task force will help others with intellectual and developmental disabilities become their own self-advocates.

“I think it will help everyone to see that a person with a disability can do anything they want, no matter what it is,” Milas said.

At The Arc of Greater Boone County, Milas takes literary classes, is a part of the Arc Artisans entrepreneurial art program and runs concessions at Gasoline Alley.

Milas wants to encourage people with disabilities to stand up for their needs, goals and dreams.  She said her father instilled in her the importance of being her own self-advocate.

“My father was a great influence on my life,” Milas said.

Milas volunteers at the Lebanon Public Library and Shalom House and was recently elected vice president of the Aktion Club, a Kiwanis program for adults with disabilities. Last year, she served as the Self-Advocate Peer Advisor for the Aktion Club and connected with Self-Advocates of Indiana, which helped her learn more about self-advocacy.

“I want to let people with disabilities to know that they can stand up for themselves,” Milas said. “Make sure you know you’re a person.”