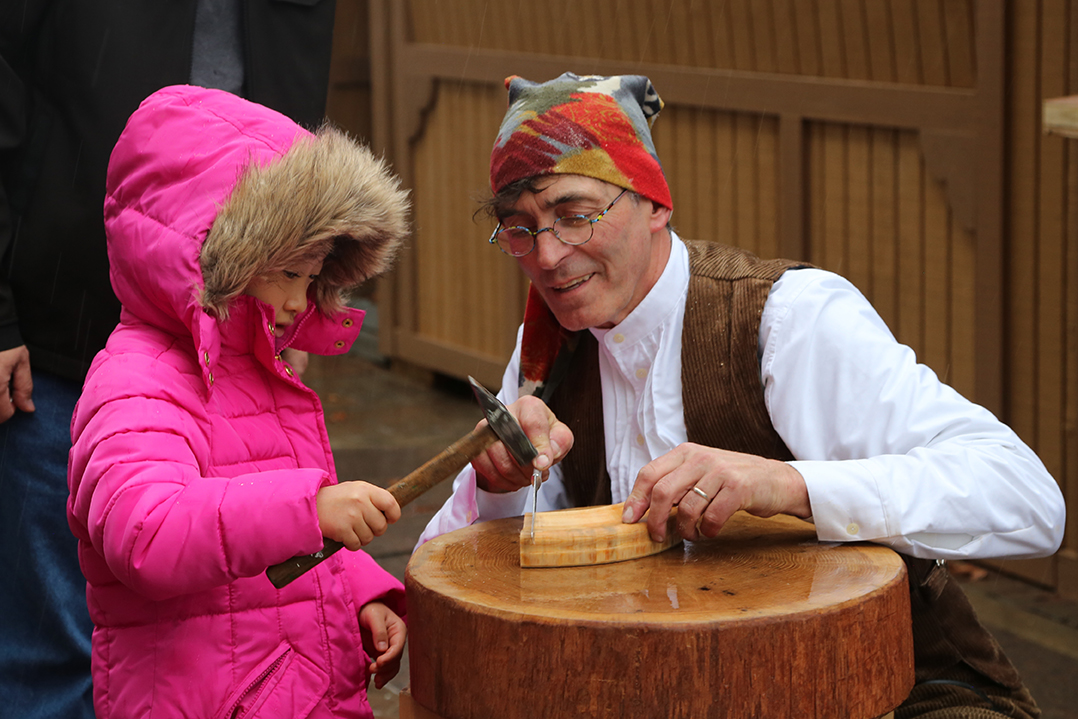 Herr Christian Werner, a woodworker who traveled from Seiffen, Germany for the opening of the Christkindlmarkt, shows Yaya Wang of Carmel how to use a tool. (Photo by Ann Marie Shambaugh)

During the first five days of operation, the City of Carmel announced that more than 48,000 people have visited its new ice skating rink and German holiday market.

Carmel Mayor Jim Brainard said more than $410,000 in sales were generated at the Christindlmarkt in the first week. Brainard said he’s pleased by the initial success, but adjustments are already planned for this year and next.

“It’s off the charts compared to what we thought,” he said. “It’s almost too many people.”

PARKING —  Carmel is trying to direct visitors to the Christindlmarkt to park in the new Veterans Way parking garage, which is just south of the Carmel City Center, slightly west of Range Line Road. The new garage has plenty of space and will reduce the burden on the parking garage at The Tarkington Theater.

FOOD — On the first day,  vendors were unprepared for gigantic crowds, and as a result ran out of products. Brainard said vendors adjusted the next day. A second booth was added for gluhwein, which is a warm wine. Bottled water was added to the Groomsville Popcorn hut. Next year, additional food options will be available.

CONGESTION — Brainard said he’d like to see the number of booths increase from 40 to 80 next year.  He doesn’t want the area to feel too congested, so the blueprint will expand to the east. He said some booths might be too big, and some gift vendors could share a booth. He said booths could be rearranged to allow for more walking room. Some have raised concerns about attendees tripping over heaters, but Brainard said he feels they are safe.

BUDGET — Brainard said the entire six-week market was projected to raise $700,000 but brought in $410,000 in the first five days. As a result, he said it will exceed projections, meaning additional employees will be hired.

ICE SKATING — Visitors can buy any skate session for the day they are at the rink. They still have to buy in person, which allows families to hold a spot and then shop and eat before their skate session begins. Skates must be rented before the session, but visitors can bring their own skates.  The capacity has been adjusted from 150 skaters per session to 200. Next year, Brainard said an online reservation system could be used where guests can prepay for their scheduled session. If those guests don’t show up on time, their spots would be open for others.

ECONOMIC IMPACT — Brainard said businesses at the Carmel City Center were packed during market days. He said he wants to have a trolley next year to transport people from the ice rink to the Carmel Arts & Design District to boost business on Main Street. He said the newly revamped Monon Trail will help connect the two areas.