You are at:Home»Current in Zionsville»Zionsville Community»Publication of book by Zionsville author, former pastor ceased after allegations of spiritual, sexual abuse

A book co-authored by a Zionsville resident and former pastor has been pulled from publication just weeks after it was released after at least two women accused him of spiritual and sexual abuse, including the book’s co-author. 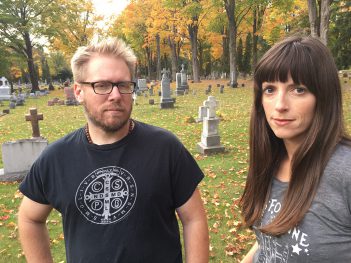 Jonathan Weyer, 43, who writes under the name Jonathan Ryan, penned “Strange Journey: How Two Homesick Pilgrims Stumbled Back into the Catholic Church” with Jessica Mesman Griffith, 40, of Indianapolis. The book was inspired by the award-winning Sick Pilgrim blog and online community Weyer and Griffith co-founded “as a space for the spiritually sick, and their fellow travelers, to rest awhile,” according to its website.

But after Sick Pilgrim administrators heard accusations in mid-November that Weyer had taken advantage of members in the Sick Pilgrim community, they investigated and removed Weyer from the community two days later, according to a post written by Griffith and shared Nov. 17 on the Steel Magnificat blog. St. Alphonsus Liguori Catholic Church officials confirmed Weyer is no longer working as pastoral associate of evangelization at the Zionsville church. An official for the Diocese of Lafayette did not respond to a request about Weyer’s status as of press time.

Loyola Press confirmed Nov. 28 that it had stopped publishing “Strange Journey” and that corresponding publication rights have reverted to the authors.

“I stand by that decision and applaud Loyola for their swift response,” Griffith stated in the Nov. 17 blog post.

Griffith also states in the post that she was a victim, too, accusing Weyer of groping her after she’d had too much to drink in August.

“This is why I believe the women who have come forward,” Griffith stated in the blog post. “I’m one of them.”

Former Sick Pilgrim community member Donna Provencher also shared her story on the Nov. 17 Steel Magnificat post. She wrote that she began communicating with Weyer, who is 11 years older than her, through Sick Pilgrim during a recent vulnerable time in her life, which he used to take advantage of her.

She stated that she and Weyer had a whirlwind long-distance romance and had discussed marriage and even baby names. She states that she flew from Texas to Indiana to visit Weyer in mid-October, and that she willingly had sex with Weyer based on the belief that they were going to get married. She states that he dumped her soon after she flew back home.

“I had sex with him under horrifically false pretenses of him having assured me of God’s intent for him to marry me, and I had many times said that I would not do so otherwise,” Provencher states. “And that is, definitionally, sexual coercion; telling other people lies in order to get laid – be it about your HIV status, your cousinship with Brad Pitt, or the Holy Spirit convicting you – is to obtain consent fraudulently.”

Weyer briefly posted a response on his Facebook page that has been removed. In it, he denied the allegations of sexual abuse, predatory behavior, harassment, coercion or exploitation.

“I admit that I misread emotional cues in my adult, consensual relationships, but I never once acted without express consent of my partner, and I abhor even the vague suggestions to the contrary,” he stated.

Weyer denied sexually assaulting Griffith, stating that they “shared kissing and holding” that he believed was mutual.

“While I believed she was willing, I should have read the emotional landscape in much better fashion,” he stated. “It was a terrible misunderstanding and one I’m deeply sorry ever happened.”

In the post, Weyer said he was molested by an older boy numerous times when he was a child and that he is putting himself “under professional care and spiritual guidance” to help him understand how he “landed in this mess and caused so much emotional damage.”

Weyer, Griffith and the Sick Pilgrim administrators did not respond to requests for comment.