You are at:Home»Current in Carmel»Carmel Cover Stories»Meet Clony Dungy: Forest Dale teacher aims to emulate former Colts coach in more ways than one 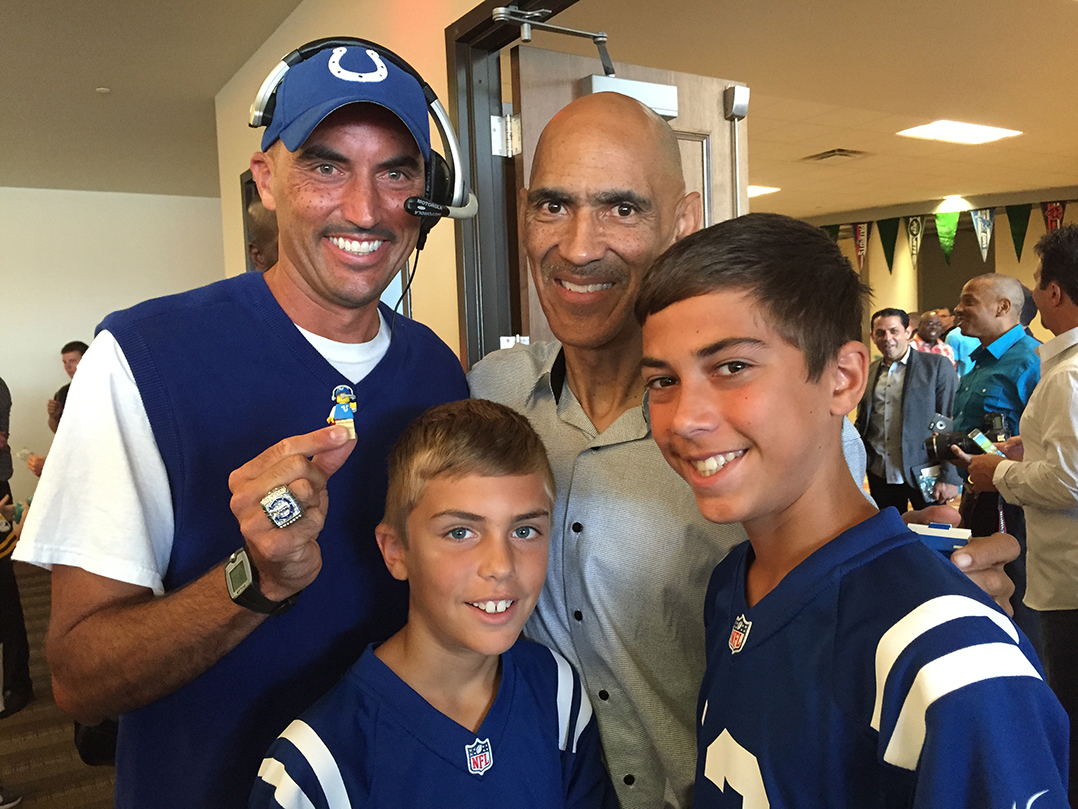 But after four years of attending Colts home games, sporting events and even appearing on ESPN as Clony Dungy, it seems it was his destiny.

“I’ve read coach Dungy’s books, and he was a great inspiration to me. It was a natural tie-in, because I kind of look like him,” Bostic said. “This whole persona is something I never would have dreamed about, but it’s pretty interesting. You don’t meet too many people who dress up like former coaches and go to football games.”

And their appearance isn’t the only thing they have in common. Both are former multi-sport athletes and coaches. Bostic, 45, coached boys tennis at Carmel High School for 15 years and the girls team for four years. The Westfield resident is the PE teacher at Forest Dale Elementary, a position he’s held for nearly two decades.

Bostic, a lifelong Colts fan, first dressed up like Dungy many years ago for the ZooBoo Halloween event at the Indianapolis Zoo. He quickly threw together a makeshift costume and noticed people doing a lot of double takes, he said.

But the idea for Clony Dungy didn’t take root until about four years ago. He and his wife were leaving a preseason Colts game when a woman stopped him on the street to point out his resemblance to Dungy.

“I wasn’t even dressed like him at all,” Bostic said. “I was in a Colts jersey like everybody else.”

So for the next game, Bostic – a season ticket holder – went all in. He wore khakis and a Colts sweater vest and brought a challenge flag and play-calling sheet to the game.

“The reaction from the fans – how much they loved coach Dungy and seeing him be goofy up in the stands – that’s where it started,” Bostic said.

He hasn’t been to a Colts game without the getup since. 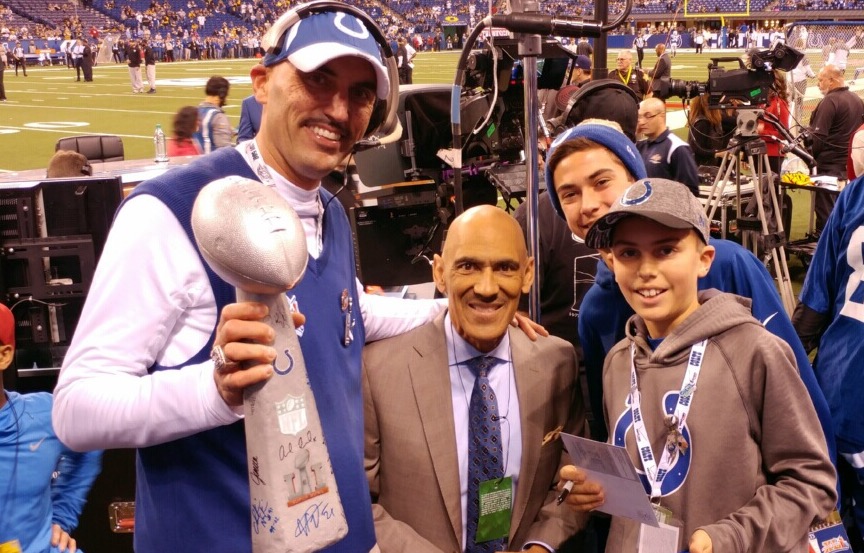 Mike Bostic, left, and his sons, Michael and Emerson, meet former Colts Coach Tony Dungy in 2016 before a Colts football game broadcast by NBC, where Dungy works as an analyst. (Submitted photo)

Bostic’s fellow Colts fans aren’t the only ones taking notice of Clony Dungy.

In 2016, Bostic was inducted into the Pro Football Ultimate Fan Association, a group of dedicated NFL fanatics who gather each year at the Hall of Fame Game in August and support charity together.

“Most ultimate fans have to create a persona, but Bostic was born with his. He is almost an identical twin of coach Tony Dungy,” said Karl Sides, PFUFA president who is also known as Ram Man. “Mike has a fantastic personality, great character and works with kids in his community, so he was a perfect fit for the PFUFA.”

Dungy happened to be speaking at a nearby church around the same time Bostic was inducted into the association, so he decided to stop by and meet his inspiration for the first time.

They met again last year before a game between the Colts and Steelers broadcast by NBC, where Dungy is an analyst for Football Night in America.

“He’s a very genuine person. He’s who you see on TV,” Bostic said. “He has enjoyed the costume and had fun with it.”

Clony Dungy has enjoyed his time in the spotlight, too. He’s been shown on TV during national broadcasts of Colts games and recently made an appearance on ESPN’s NFL Sunday Countdown.

And while he created Clony Dungy to have fun, Bostic is serious about how he portrays the former coach.

“When I go to the games, I’ll get fired up in the stands and make noise, but you’re never going to see me shining a negative light on who he is. I’m very aware of my actions when I’m in costume and out of costume,” Bostic said. “I don’t want to send any negativity his way. That’s very important to me.” 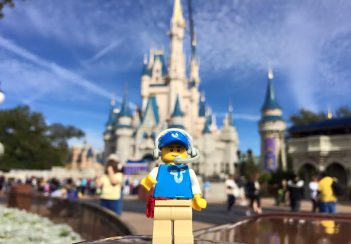 Although he doesn’t typically show up for work as a PE teacher at Forest Dale Elementary as Clony Dungy, his presence is always in the classroom – and often around the world.

Mike Bostic created Lego Clony Dungy, a much smaller embodiment of the coach, with his sons’ tiny building blocks. Lego Clony Dungy began his travels when a fellow FDE teacher took him along on a trip to San Antonio for her son’s graduation and documented his visit with photos.

Bostic decided to see where else Lego Clony Dungy could go. Turns out, just about anywhere.

“I was able to get him on every single continent in a year’s time, including Antarctica,” said Bostic, who acknowledged he’s felt a little jealous of some of Lego Clony Dungy’s travels.

“We don’t talk (about it) a whole lot, but kids will go over and look at the board and see where he’s been,” Bostic said.

Learn more by searching for “The Adventures of Lego Clony Dungy” on Facebook or following @ClonyDungyXL1 on Twitter.

Favorite quote: “You should never be defined by what you do, by the things you have; you’ve got to define yourself by who you are and who you impact and how you impact people. And that’s the thing I try to get across to my players.” –Tony Dungy

Most memorable moment as Clony Dungy: There have been a lot, but I was just invited to ESPN two weeks ago and got to be on the NFL Sunday Countdown Show! Experience of a lifetime!

Favorite on-the-field Colts moment: Marlin Jackson’s interception of Tom Brady to send the Colts to Super Bowl XLI. To me, it’s the single most important play made in Indiana sports history.