You are at:Home»Current in Noblesville»Noblesville Cover Stories»Board game bros.: Noblesville’s Brady and Adam Sadler making a name for themselves in the gaming world 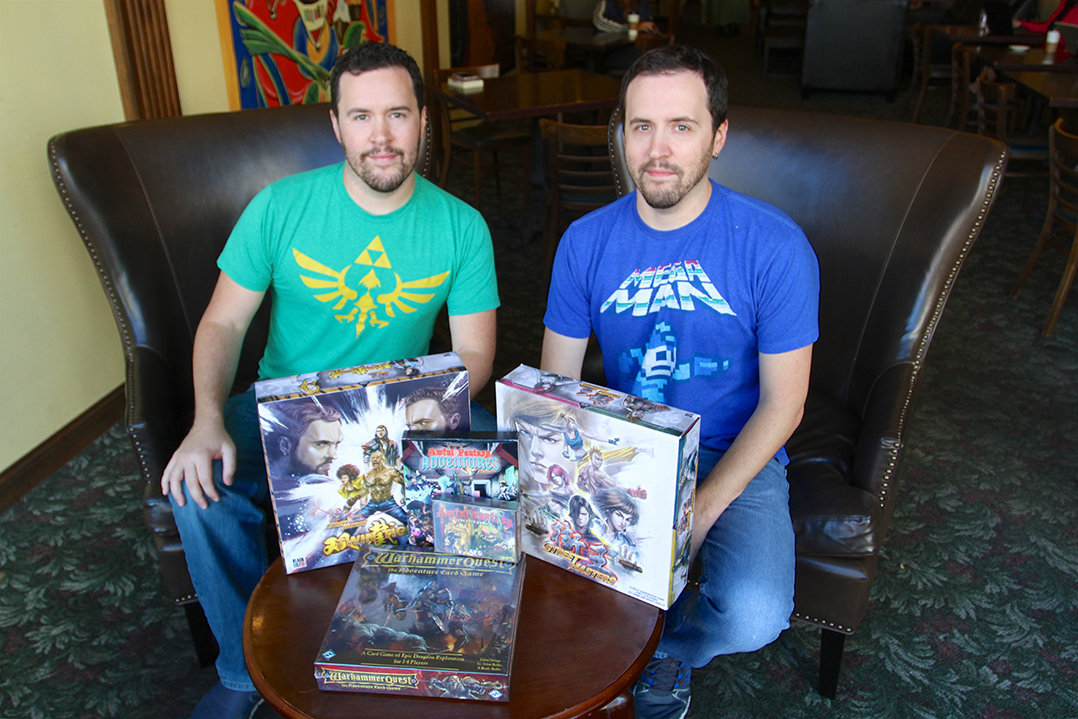 For the past several years, twin brothers Adam and Brady Sadler have been freelancing as board and card game designers in Noblesville.

Born in Lafayette, they moved to Noblesville four years ago after living in Minnesota, where they worked full time at Fantasy Flight Games.

“It’s one of the bigger game publishers, so that’s kind of where we got our start,” Adam said.

“We’ve been interested in games since we were kids,” Brady said. “We grew up with video games. We played some board games. Our mom was really into board games, but it’s weird because then we got into music, so that kind of got us into the fantasy world. We were in a fantasy metal band (called Lorenguard).”

Soon after being in the band, Brady, an author, wrote a novel to correspond with the band’s album.

“It told the story behind the music,” he said. “We were all characters and stuff, so it was very nerdy already, but doing all this stuff kind of got us into games. From there, it was just a downward spiral. So, we ditched (the band) and started doing (games) instead.”

Adam was the first to venture into professional game design after an opportunity arose at his job.

“I worked for a puzzle factory in Lafayette called Mega Brands, and when I was working there, a project came up that needed a game design,” Adam said. “They didn’t have anybody to design games, so I said, ‘Oh sure, I play games. I’ll do it.’ So, I designed a game for “Avatar,” the movie, but that was kind of my first dabbling into game design, and then I went from there to (Fantasy Flight Games) and started doing it seriously.” 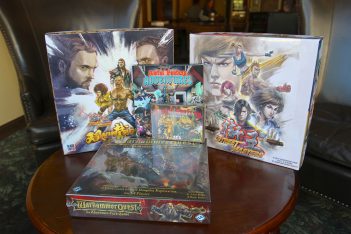 Mock-ups of “Street Masters: Rise of the Kingdom” and some of the other games the brothers have designed.

Both brothers now work as proposal writers for a cloud-consulting tech company based  in Indianapolis, Appirio.

“That’s our full-time job, but because we work from home, we can take a lot more contracts (for game design) than we normally would be able to,” Brady said.

A Kickstarter campaign funded the product that will be seen by backers in the U.S. and U.K. sometime after Christmas or in early 2018. Originally, the goal for the crowdfunding campaign was $250,000, but the brothers had raised more than $433,000 as of Nov. 20.

Currently, the brothers are fundraising for a different Kickstarter campaign for “Street Masters: Rise of the Kingdom,” a game they said was inspired by arcade and video games of the ’80s and ’90s. The campaign has raised nearly $100,000, almost double of the original $60,000 goal.

“We’ve never actually designed a game and pitched it to a publisher,” Adam said. “We don’t think we’d want to do that. Usually, the publisher will come to us.”

“They’ll have an idea and then let us design it,” Brady said. “For (‘Street Masters: Rise of the Kingdom,’) we knew these guys from other projects. They were starting a new company and had a specific idea with all of these characters. So, when they wanted to do a game, they had no design. They just said, ‘Hey, can you guys make us a game using these kinds of characters and these kind of themes?’ So, we did our own design based on their ideas, and that’s our first launching title with a new company. Pretty exciting.”

Most recently, the duo has been working on another game, which also will have a Kickstarter campaign, set to launch in February.

“We don’t do this to make money,” Adam said. “I, personally, don’t have a goal of ever doing this full time. I like my set up, having a day job and then designing for fun, because when we did it at Fantasy Flight (Games) full time, it became work.”

“Plus, when you do it full time, you’re having to do it for somebody else’s vision,” Brady said. “But, if we’re doing it freelance, we choose which publishers we work with and which project we want to take.”

Other popular games designed by the brothers include: “Warhammer Quest: The Adventure Card Game,” “Star Wars: X-Wing” and “Descent: Journeys in the Dark second edition.” The brothers have been named to BoardGameGeek’s top designers list multiple times.

Adam and Brady Sadler, 34, are originally from Lafayette, Ind. They moved to Minnesota to work at Fantasy Flight Games before moving back to the Indianapolis area and eventually Noblesville for work and to be closer to their families.

Brady is married to Sarah. They have a 5-year-old daughter, Riley, and a 2-year-old son, Oliver. Adam has a daughter, Amelia, who turns 5 in December.

Because the brothers are often in charge of designing specific characters, their family members, as well as themselves, have made appearances in several games.