Noblesville Mayor John Ditslear has announced that the grand marshal of this year’s Christmas parade will be Charles L. “Chuck” Crow. 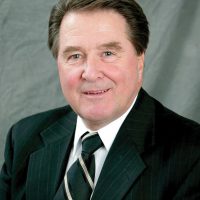 “I’ve been here in the Noblesville community for a long time – about 48 years. It’s a real honor to be selected,” Crow said. “I think Noblesville really promotes the holiday season very well. It’s always an enjoyable time in the community and seeing the kids coming in and out of the Santa House.”

In 1966, Crow graduated from Purdue University and served two years in the United States Army. He began his banking career in 1969 at Noblesville’s Wainwright Bank and Trust Co. Crow and 10 local investors started Community Bank in 1991. He has been past chairman and a member for more than 40 years of the Indiana Bankers Association. Crow also served nine years on the Federal Home Loan Bank of Indianapolis board and on three national committees of the American Bankers Association.

“Chuck’s accomplishments go well beyond the banking industry,” Ditslear said. “He and his wife, Sally, are firm believers in giving back to the community, and they have supported a variety of Noblesville organizations through their time, money and involvement.”

“Being in the banking business, you try to support every organization that was in the community,” Crow said. “I always felt that you needed to put back into the community what you get out of it. You need to try to make it a better community by supporting as many groups as you could.”

The Christmas Parade, sponsored by Community Health Network and presented by Noblesville Main Street and the City of Noblesville, starts at 16th and Harrison streets and will travel south on 16th Street to Logan Street, west on Logan to Ninth Street, north on Ninth to Monument Street, and east on Monument to 16th Street where it will end. The last entry in the parade will be Santa Claus himself, making his debut for the season. Boys and girls are invited to stop by Santa’s House on the courthouse square after the parade from 3 to 5:30 p.m. and tell him what they’d like for Christmas.