You are at:Home»Current in Zionsville»Zionsville Community»Whitestown plans 11-acre park near Walker Farms 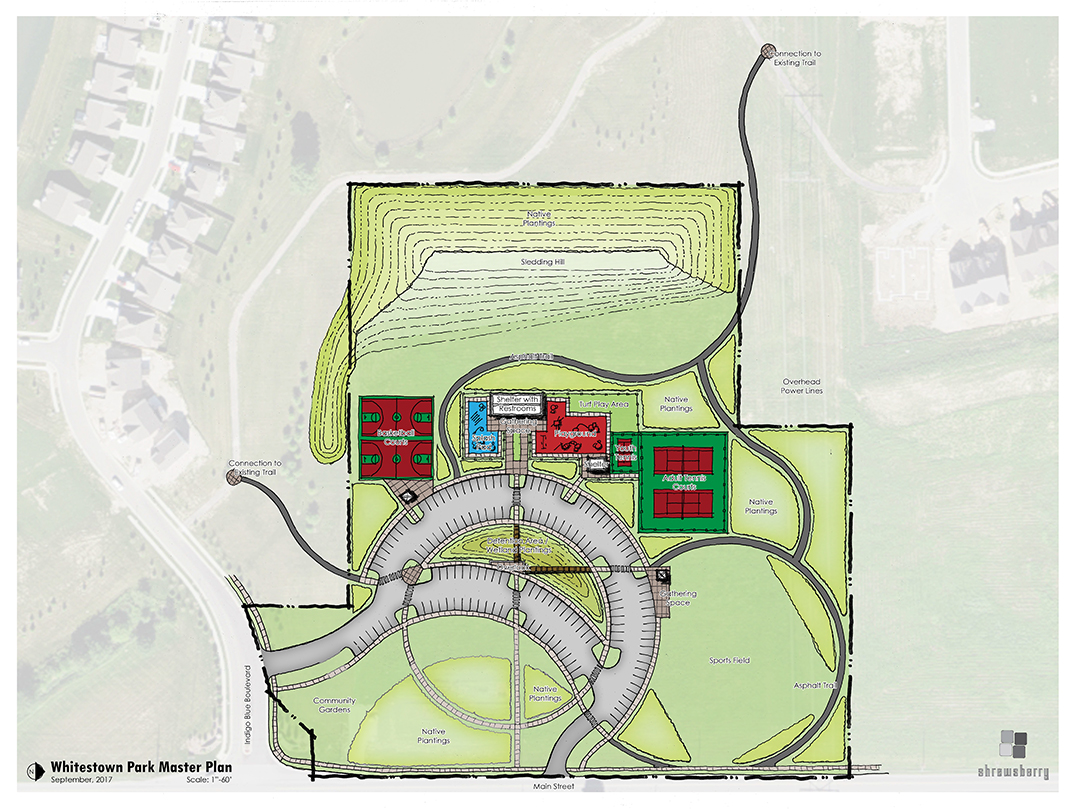 Whitestown is planning an 11-acre park with basketball and tennis courts, a splash pad, playground and more near Walker Farms. (Submitted photo)

The Whitestown Parks and Recreation Dept. is developing plans for an 11-acre park off Main Street near the Walker Farms subdivision. The concept drawing includes two basketball courts, three tennis courts, a splash pad, a playground, a turf play area, a sledding hill, one large shelter with restrooms and a few smaller shelters scattered throughout the park. It also is planned to incorporate the community gardens already in use.

The town currently has access to 7 acres, which is land donated by the Walker Farms developer. The other 4 acres belong to Beazer Homes and are used for draining purposes. Nathan Messer, parks director, said Beazer plans to donate that land if the town can help with the drainage issue.

The town had discussed using the land for a new town hall, which wasn’t necessary, or a police station, an idea not embraced by some residents in the area. Messer said officials ultimately decided to create a multi-use park because it’s something the town lacks.

“When you come up with a plan like that, you’re never sure how people are going to react,” Messer said. “I had a strong feeling they were going to be happy and excited, but I think the excitement behind it is more than I expected. It definitely fits the need and desire for that park.”

With the concept drawing complete, the department’s next step is to present the town council with funding options for the $4 million project. Messer said he is working with attorneys and accountants to find the best funding source to complete the project in its entirety rather than in phases.

Messer wants to begin construction next spring, and if all goes well, open the park in the fall.

“It just creates a destination place of community that we don’t have and we want, and now we are looking at getting it,” Messer said.