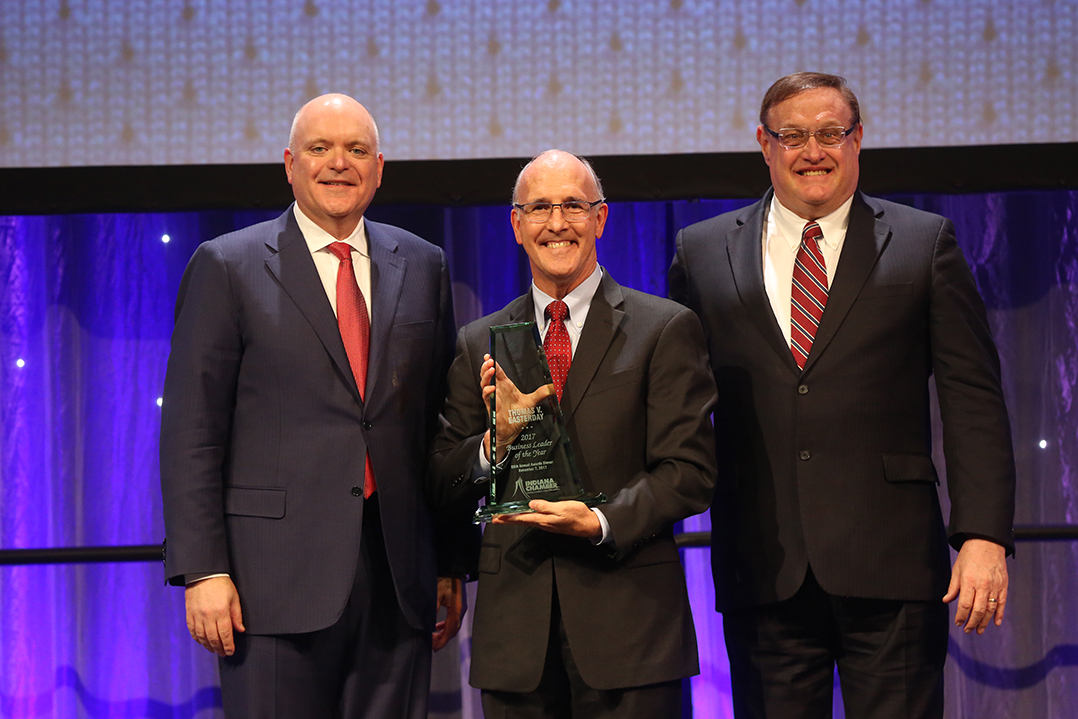 Tom Easterday’s impact as a business and community leader has not gone unnoticed.

The former Zionsville Town Council president was named Business Leader of the Year Nov. 7 at the Indiana Chamber of Commerce’s 28th annual awards dinner in Indianapolis.

Easterday, who has lived in Zionsville for 31 years, is the senior executive vice president, secretary and chief legal officer at Subaru Indiana Automotive in Lafayette.

“Tom has really been instrumental in growing and leading SIA to be one of the most highly-rated, well-respected automotive assembly facilities in the country,” Indiana Chamber President and CEO Kevin Brinegar said. “Tom is very calm and very thoughtful. I’ve been to that facility several times, and when you walk around with him, you pick up how admired he is, how well respected he is and how well liked he is by the associates there. Tom sets the tone. He is so thoughtful and insightful. I’ve seen him in board meetings and group settings where he lets the debate go on, but then when Tom speaks, people really listen. And far more often than not, they do what he suggests and recommends.”

“It’s a great honor to be recognized, and it really serves as recognition for the great teams I’ve worked with here at Subaru Automotive and the number of fantastic government, community and business leaders that I’ve had the pleasure to work with on a number of issues,” Easterday said.

Easterday has been with Subaru of Indiana before production began in 1989. He started as corporate counsel and is the first American to be appointed to the SIA board of directors.

“In the last four years, we have added over 2,000 new jobs at SIA in Lafayette,” Easterday said. “We’ve been growing quite a bit, and we are now the fastest-growing automaker in America right now.”

Easterday’s son Matt, 29, is a longtime Special Olympics athlete. His wife, Deb, is chair of the board of directors of Special Olympics Indiana. His daughter, Anne Bohm, 32, and her husband, Clinton, have three sons.

Along with Special Olympics, Easterday is passionate about Boy Scouts. Easterday was a Boy Scout and so was his father, Ed.