It’s fitting that a memorial to celebrate Edie Kellar Mahaney’s life will take place at the SullivanMunce Cultural Center. 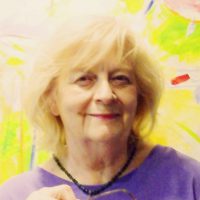 After all, Kellar Mahaney was instrumental in developing the Munce Art Center before becoming the museum’s first executive director.

After moving  to Zionsville in 1970 with her family, Kellar Mahaney volunteered with the Patrick Henry Sullivan Museum Guild. Then the opportunity presented itself to create an art center. With an MFA in-studio painting and a background at a historical museum in Columbus, “it just was a perfect fit,” said her son, Jackson Mahaney. “She had all of the expertise to make something like that work.”

Under her leadership in the 1980s and ’90s, the genealogy library also was added.

“That truly was because of her drive and commitment to create something that was living, not just a history museum,” said Jackson Mahaney said, who worked closely with his mother during those decades teaching art and as director of the art center.

It became a family affair, with daughter Lolly assisting with fundraising and husband Jack caring for the grounds.

“It was definitely a part of her heart,” Lolly Mahaney said.

Two decades later, Kellar Mahaney began a new chapter, leaving SullivanMunce and returning to painting. Jack Mahaney built a studio for his wife in the back yard and Lolly Mahaney spearheaded her mother’s gallery and business.

“She started right back in and didn’t miss a beat,” said Lolly Mahaney, who began sharing her mother’s work through a licensing company.

In 2013, several prints were produced by World Market and Z Gallerie. Seeing her art in a retail chain made her mother “giddy,” Lolly Mahaney said.

Several years ago, Kellar Mahaney began to have Alzheimer’s-type symptoms and stopped painting. Last yea,r she was diagnosed with Lewy body dementia and died Nov. 8.

Lolly Mahaney wants to continue to share her mother’s art with others.

“Her works lends itself to all of these opportunities,” she said. “We’ll see how the next phase goes.”

A celebration of life and a retrospective exhibit will be June 2, 2018, at the SullivanMunce Cultural Center.