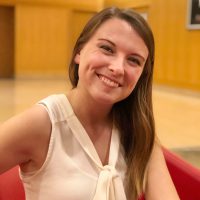 Brinkmen recently spoke on mental health during Student Talks, the IUPUI equivalent of Ted Talks, and is being considered to join the board of directors at the National Alliance on Mental Illness Greater Indianapolis.

Brinkman applied and was accepted to speak at Student Talks and went through a crash course in public speaking. After the event, she said she would be interested in pursuing something similar to the Student Talks again.

“Ironically, I used to be terrified of public speaking. I have something called essential tremor, and when I get nervous I shake more and I used to shake really bad and would completely lose train of thought,” she said. “As I’ve gotten to do events like this, (public speaking) has kind of become a talent of mine and I use it as a platform to share my story.”

Brinkman also co-founded Students Who Care at IUPUI with Mackinzi Bradshaw. The group is partnering with NAMI.

“They reached out to us because they saw we were passionate about reducing the stigma on college campuses and wanted to form a partnership to help them achieve to do more in that area,” Brinkman said.

The partnership will encompass creating a support group to assist students on the waitlist for the campus’s Counseling and Psychological Services program; put on a fundraising walk; and utilize Students Who Care for NAMI’s Ending the Silence program.

“(The program) helps mentor young students into giving stories with mental illness and a voice that encourages students,” Brinkman said. “Our members are looking to get involved with that young adult audience.”

Brinkman applied to be on the board of directors for NAMI Greater Indianapolis, and she will know if she is accepted by early December.

According to Brinkman, NAMI is attempting to diversify its board, and she would be the first young adult on the board if accepted.