You are at:Home»Current in Fishers»Fishers Community»High Level Design Salon and Barbershop works to give back to charity

High Level Design Salon and Barbershop wanted to pay it forward by raising money for local homeless shelters. Jessica Foster and her husband Zach own the salon. They were inspired to do something charitable for the community by their daughter. 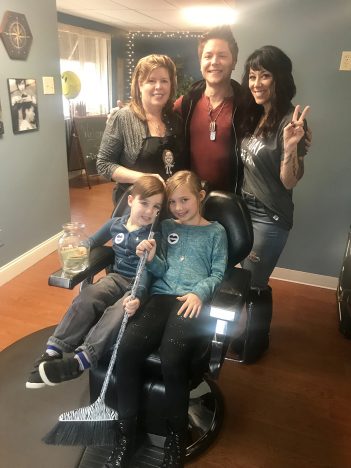 “My daughter Layla had come across a group of homeless people, and she wanted to help them,” Jessica said. “This year with opening our own shop it seemed like the right time. I need to cultivate the idea of giving back in my daughter, and so we decided to do it.”

Foster created Cuts for a Cause. She opened her shop Nov. 19 and offered haircuts for donations only.

“We’re normally closed on Sundays, so we decided to open the shop from noon to 5 p.m. and offered quality haircuts for donations only,” Jessica said. “All the proceeds will be going to go to local homeless shelters.”

Jessica and Zach opened their salon after Jessica was displaced from a former employer because of a fire.

“I had been working at Salon Etc. for seven years. Myself and 30 other stylists were displaced due to a fire,” Jessica said. “After the fire, I was temporarily working at a space trying to figure out what was going to happen. We had always wanted to open our own salon, but were looking about five years down the road. All of a sudden we realized now was the time.”

Jessica realized after the fire that she wanted to help others in the community.

“This is the first time we’ve done this,” she said. “We have an opportunity and a skill we can offer. I would love to do this for other causes in the future. Any cause is a good cause to someone.”