You are at:Home»Current in Carmel»Carmel Community»Carmel Riley Champion’s toy drive to continue despite stroke

A Carmel High School senior who spent this year serving as a public ambassador for Riley Hospital for Children was back in the emergency room Nov. 18 after having a stroke. 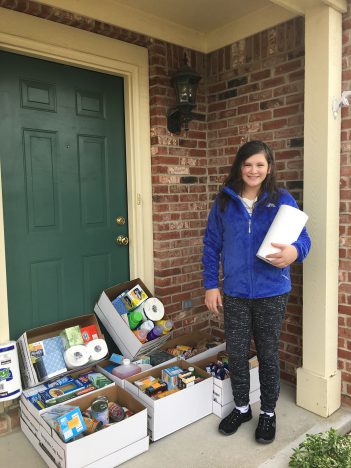 Bella Simons organized a donation drive to benefit Ronald McDonald House Charities of Central Indiana. The donation was made the day after she got out of the hospital after suffering a stroke. (Submitted photo)

Bella Simons, a 2017 Riley Champion, started showing symptoms of a stroke during a Nov. 17 campus visit at Taylor University.

“This is really scary,” her mother, Tasha Simons, posted on Facebook Nov. 18. “She seemed unusually tired. She walked into a door twice last night (trouble with coordination); her arm isn’t working and her smile is crooked and she’s not speaking coherently.”

Doctors discovered that Bella had two brain tumors in October 2015. After brain surgery she had six weeks of radiation treatments, which doctors believe may have damaged arteries and eventually led to the stroke, Tasha said.

Bella will have an angiogram Nov. 27 to determine if she will need another brain surgery to prevent future strokes. The surgery would likely occur one month after the stroke.

Bella is recovering at home and has not been cleared to attend school because she is at risk of falling, as the stroke altered her sense of balance. CHS is providing tutors to help her keep up with school work at home, as they did when she was recovering from the brain tumors.

“She also needs physical therapy to regain the use of her right arm. It’s very hard for her to use it to feed herself, write, dress herself, etc.,” Tasha wrote on Facebook. “She needs occupational therapy and speech therapy. She has trouble finding words and completing thoughts and sentences sometimes.”

Though it’s been a scary week for the Simons, they are not letting the situation quench their giving spirit. Bella organized a donation drive at CHS for Ronald McDonald House Charities of Central Indiana, which provided food and shelter for the Simons family during Bella’s hospital stays. On Nov. 21 eight boxes of donations were delivered to help families with critically ill children.

A toy drive Bella had been organizing at CHS will also go on as planned. From Dec. 5 to 12, students can donate new toys to benefit families at the Ronald McDonald House.

“She planned this not knowing Todd and I would be having our meals there while she was treated for a stroke,” Tasha wrote on Facebook. “I stayed the night at Riley RMHC and I thought of how genuinely excited she was about her donation drive and toy drive. We were scheduled to serve dinner there on Thanksgiving as a family but that’s not going to work with her recovery.”