You are at:Home»Current in Carmel»Carmel Community»TOWER program reduces recidivism rates in Hamilton County 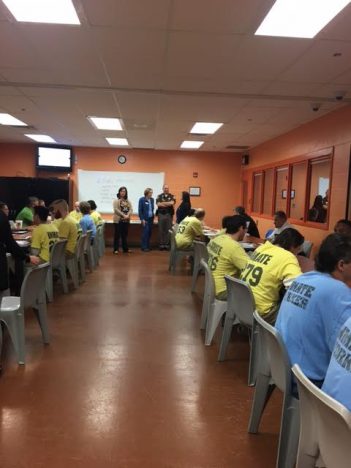 The Hamilton County Sheriff’s Office is helping reduce recidivism rates through a new program that connects inmates with job training and employment opportunities.

The Hamilton County Sheriff’s Office Transitioning Opportunities for Work, Education and Reality Program held its first job fair Oct. 10. The jail partnered with WorkOne Center, an Indiana workforce development organization, to provide inmates who are within 180 days of being released from jail with opportunities to gain practical job training, coaching and opportunities for employment upon release.

The five-week program covers practical career skills such as resume writing, completing an employment application, cognitive behavioral techniques, dressing for an interview and conducting an interview. After release, graduates are connected with the WorkOne office, which is approximately 1 mile from the jail, for continued assistance.

The program is fully funded by a federal grant of $427,337 from the U.S. Dept. of Labor, Employment and Training Administration. The grant is a partnership between the Region 5 Workforce Board, WorkOne Central and the Hamilton County Jail.

Jail Commander  Capt. Jason Sloderbeck said many inmates have a feeling of hopelessness because of their criminal background and believe they can’t get a job because of it. The TOWER program aims to provide inmates with the confidence, real-world training and opportunities to succeed upon release.

“It gave them hope that showed that there are people willing to consider them and give them a chance,” Sloderbeck said.

Sloderbeck said statistics show that recidivism is reduced if inmates have an education and employment. Four percent of TOWER graduates in Hamilton County return to jail, while the national recidivism rate is more than 40 percent. In the past six months, 70 inmates have been been enrolled in the program, and 48 percent have been released from jail and became employed. The sheriff’s office anticipates serving a total of 100 people through the program by the end of the year. Sloderbeck said  transportation and housing continue to be major barriers in employment placement.

TOWER is the newest program at the jail to assist inmates and help lead them to better opportunities. The jail also has had one of the longest running high school equivalency programs in the state for the past 30 years.

“I believe that Hamilton County is the most progressive jail in the state,” Sloderbeck said.